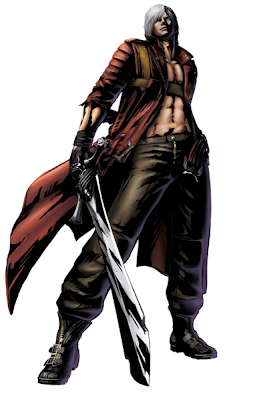 Dante is the main protagonist in the Devil May Cry series. He is the second son of Sparda and Eva, and the younger twin brother of Vergil. As such, he is a half-demon, half-human hybrid. Dante is a mercenary dedicated to exterminating demons, a mission he follows in pursuit of those that killed his mother and corrupted his brother.

In Marvel vs. Capcom 3's Episode 1 trailer, Dante is seen battling Deadpool in a bar named after both of them, slashing swords and guns blazing with each other. The battle ends however, when Deadpool is pricked by Morrigan. Dante is later seen at the end of the Episode 4 trailer, among all the other Marvel and Capcom heroes and battling against the villians on the S.H.I.E.L.D. Helicarrier.

In his ending, Dante breaks the 4th Wall (similar to Deadpool) and challenges Ghost Rider to a duel, believing that fighting against him after the "final boss" makes "Life the ultimate game". 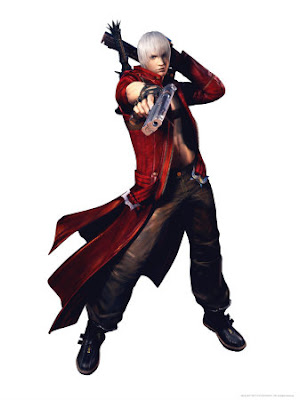 Earlier in the Devil May Cry series' story, Dante is incredibly cocky and flippant, mouthing off to even the most powerful of demons and he generally enjoys rubbing people the wrong way. He does mature as time goes by, but never really loses his attitude. Dante is seemingly unafraid or just plain stoic, not showing fear whether he's being attacked by the Seven Hells in his office or being swallowed by a giant serpent demon. With the exception of Devil May Cry 2, Dante rarely shows any seriousness. He can be serious when the situation calls for it, but he still maintains a fairly laid-back demeanor during such situations and is never without a witty taunt or comeback. Dante can seem at times to be uncaring or even callous, but actually has a very strong sense of justice and prefers to fight fairly. He can be counted on to do the right thing, even if he makes cynical quips about it the entire time. Unusually, while he has issues with his own demonic side, Dante has little qualms about accepting demons who choose the side of good, such as Trish and Bradley. Though Dante is quoted as believing that "Humans are often worse than demons" in the anime, he refuses to kill full-blooded humans for any reason. Dante values family and friends very highly. He cared deeply for his mother and, despite their differences, he also cared for Vergil. Even after all the fighting the two did over the course of Devil May Cry 3, Dante still tried to save him when he (Vergil) was falling into the Demon World, and even went as far as to cry over losing him. ﻿