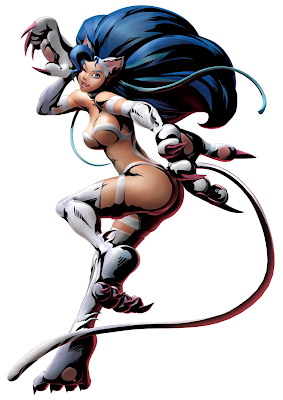 Felicia is a video game character from Capcom's fighting game series Darkstalkers (or Vampire Savior in Japan.) She appears in Marvel vs. Capcom 3 alongside Morrigan and Hsien-Ko, two other Darkstalker females. Felicia was raised by a Catholic nun named Rose. When Rose died, Felicia left her town hoping to be a musical star. During her travels, she met many other catgirls of her kind. With her newfound friends, she set out for her dream of being on stage. Eventually, she and her friends started a musical with Felicia being the main star.
In the events of Darkstalkers 3, she wondered about how she could make others happy. In her ending, Felicia became a nun herself and founded an orphanage named "Felicity House." 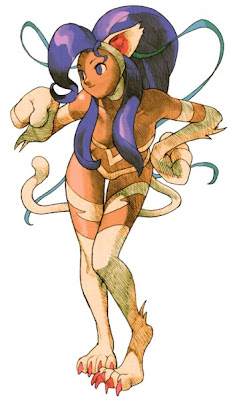 In Marvel Vs Capcom, Felicia was seen with Mike Haggar trying to put out the flames on his "Vote Haggar" sign in the 4th opening. She was helping by blowing it out with her breath. Her tail then caught fire, where she ran around, jumped on Haggar's sign and scratched it with her claws.
On the U.S. website of Marvel vs Capcom 3, Felicia was until recently the only character whose entire body was cut out (the same was more recently done to Morrigan as well), leaving just her head and right hand. This could be due to her body and might have forced the developers of the website to adhere to censorship standards. The same thing goes for Marvel vs Capcom 3's Facebook picture of her. Even in the game's intro, her body is cleverly censored most of the time. Her breasts aren't visible because she is piggybacking on top of Haggar, and her buttocks are hidden at one point by her foot.
Posted by bluedreamer27 at 8:45 PM