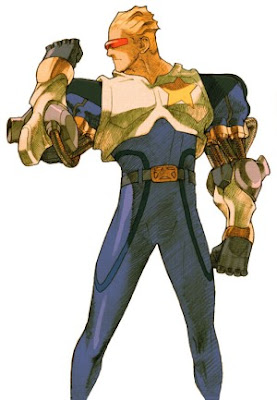 Captain Commando is a video game character, and the former mascot of the video game company Capcom. His name being derived from that of his company (Captain Commando). He is a blonde superhero wearing a visor and a white-and-blue costume with a large star on his chest. He originally appeared in instruction manuals for Capcom games during the developer's earliest days of game production in the mid-1980s, thanking the player for purchasing the game. In that early rendition, he did not have glasses, wore two large medallions with the letter 'C' around his neck, and brandished a gun in one hand and a sword in the other. He was eventually given a beat 'em up game of his own with his present design in 1991 (simply named Captain Commando); however, the game did not catch on with avid arcade players, and Captain Commando was replaced as Capcom's mascot after characters from more popular games, such as the Mega Man and Street Fighter II series, came into vogue. 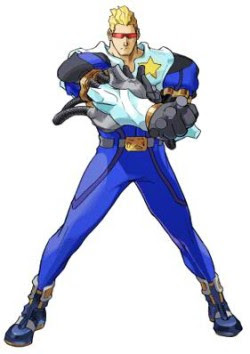 Like most of his peers in the Commandos, his origins are in mystery as well. Though born in the US in the year 2000 and was 26 years of age, he was able to obtain special ruby shades that allow him to summon his armor. His weapons include an Energy Glove, allowing him to use his special moves such as Captain Collidor, emitting high voltages of electricity and the Captain Fire, emitting fire from the same glove as well. A performed action called Captain Sword actually assembles his entire team from his original game to attack.
Posted by bluedreamer27 at 7:30 PM