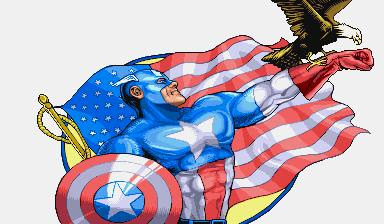 Captain America, also known as Steve Rogers, is a Marvel Comics superhero who has been a symbol of America since the 1940s.
Steve Rogers was a weak young man who lived during World War II and desperately wanted to enlist and fight the Nazis. However, he was deemed unfit to be in combat, until he was brought into a special program called Operation: Rebirth. There, he was the one who tested the Super Soldier Serum, which transformed him from a scrawny and weak young man, to a soldier who was at the peak of physical perfection. However, before the serum's ingredients could be written down, the lead scientist was assassinated by a Nazi spy. Steve, now with the name Captain America, was given a shield and tasked with fighting Hitler's forces such as the Red Skull and Baron Zemo. With his sidekick Bucky, Cap fought for the American dream, serving alongside future heroes such as Wolverine and Nick Fury. However, while trying to stop a missile, Bucky was seemingly killed and Cap was flung into the ocean and frozen until modern times. 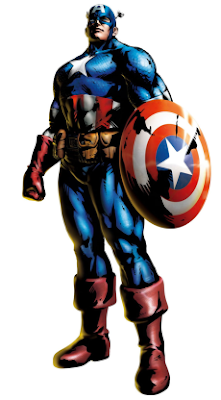 Captain America is an all-around patriot, believing in all of the things that make America great. He always strives to make America even better. He is a very dedicated friend, and has a set group of ideals. He is strictly opposed to any form of oppression, which is why he rebelled against the Super-Human Registration Act, viewing it as a violation of their constitutional rights. He can be a bit stuck in the past, always remembering the things he lived with during the Great Depression and World War II compared to modern things.
In Marvel vs. Capcom 3, his friendship with Iron Man is shown by their use of a first name basis. While switching out, Cap calls Iron Man "Tony," and Iron Man calls Cap "Steve." Also in Marvel vs. Capcom 3, when Cap defeats Iron Man, one of his quotes during his win pose is "That's for the Civil War", referencing the major Civil War storyline in the comics, as well as the game "Marvel Ultimate Alliance 2, where the heroes were against each other in a war and Cap and Iron Man respectively led each side. He is one of the last 7 fighters that has made an appearance as a playable character in every single Marvel vs. Capcom game since the first one.
In Marvel vs. Capcom 3, Captain America's rival seems to be Felicia, because they both have dreams. Cap has the American Dream (due to the love of his country) and Felicia has a dream of becoming a popstar.
Posted by bluedreamer27 at 2:14 PM