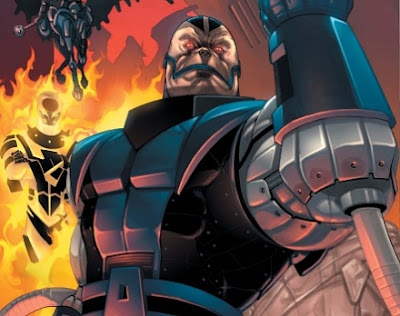 Apocalypse, one of the very first mutants on the planet,was born in Egypt. When his family looked upon his hideous gray body and pale, thin blue lips, they cast him out into the desert, where he was found and raised by Baal and his tribe of nomads. Baal named him En Sabah Nur, and taught him the moral that only the strongest survive. This moral guided En Sabah for his entire life.

One day, he stumbled upon a spaceship that had belonged to an alien race known as the Celestials. Seeking to learn more about it, he tracked down time traveler Nathaniel Summers (Cable). The two fought, and En Sabah Nur nearly lost his life, but was rescued by Ozymandias, an ally of his. En Sabah Nur's blood had been infected with Summers' Techno-Organic Virus, which allowed him to become more powerful as well as interface with the ship's technology. He fashioned a high-tech suit of armor for himself that granted him unbelievable powers, and thus fully made the transition into Apocalypse, soon to be known by many names: The High Lord, The Forever Walker, The First One, Son of the Morning Fire, even Set, the Egyptian god of evil.

In 19th century England, Apocalypse met brilliant scientist and telepath Nathaniel Essex, who shared his love for mutant genetics. Apocalypse saw him as a worthy ally and, outfitting him with similar molecular shape-shifting powers to himself, transformed him into the sadistic Mr. Sinister. 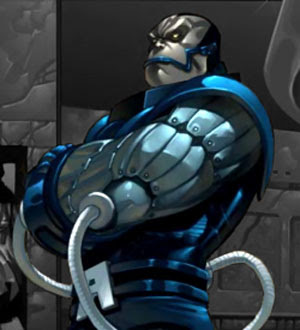 Apocalypse later formed a group called The Horseman of Apocalypse, playing off the biblical concept of the Four Horseman: Plague, War, Famine, and Death. Though the roster has never been set in stone, its members have included Gambit, Angel (Archangel afterwards), Sunfire, Wolverine, Caliban, Deathbird, even the Incredible Hulk. Apocalypse was believed to be destroyed when Jean Grey psychically ripped his essence from his body, and Cable destroyed it with his own powerful telepathy. But he was later revived, and continues to plague the earth, not willing to be content until every living creature has bowed before him and pledged their undying allegiance.
Apocalypse is easily one of the most powerful mutants who ever lived. Apocalypse is an Alpha-Level mutant. After exposure to the Celestial Ship, all of Apocalypse's powers have been enhanced far beyond their original limits.
Apocalypse's original body was immortal, even before being modified by the Celestial ship, he had lived for thousands of years. Apocalypse can enter a coma-like state of suspended animation during which he may recover from any wounds with the assistance of his Celestial technology. The down side of his altering by the Celestials and his enhancement was that the techno-organic virus needed to allow this to happen ravaged his body requiring him to find new ones over the years.
Posted by bluedreamer27 at 5:25 AM