Cammy, also known by the full name Cammy White (in Super Street Fighter II) and the codename Killer Bee (in Street Fighter Alpha 3), is a video game character in the Street Fighter series. She first appeared in the fighting game Super Street Fighter II, which was released in 1993, as one of the "New Challengers", the four new characters introduced in that title. She is the second female character in the Street Fighter series, following Chun-Li. Out of the four New Challengers, Cammy is by far the most prominent, having many more game appearances than the others, as well as more appearances in games and other media than many of the original "world warriors."
Cammy is a quick, close range fighter. She lacks any projectile or long-reaching attacks, and therefore hurls herself at the enemy relying on speed and priority. For example, her standing hard punch can often cancel an opponent's attack outright, if it connects. Priority such as this makes her one of the easiest characters to use in Capcom vs. SNK 2. Her original incarnation in Super Street Fighter II had trouble evading projectile attacks, so later incarnations involved reworked and additional special moves to evade fireballs with ease. 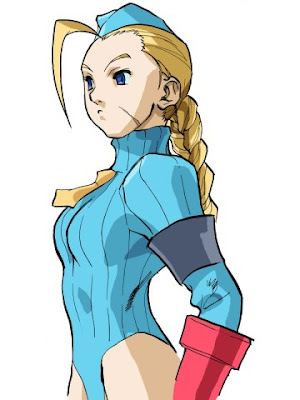 Cammy's anti-air move, the Cannon Spike (or Thrust Kick in the English versions of SSF2) causes her to quickly kick one leg upward into the air, twisting her body and flipping backward, putting her at a safe range from the opponent when the move completes. It has very high priority for such a safe move.

Cammy's forward offensive attack, the Spiral Arrow (or Cannon Drill in the English versions of SSF2) causes her to lunge forward, feet first, while spinning. Used as a distance-clearing attack, its original versions were still vulnerable to being struck by projectiles. However, her Spiral Arrow in Capcom vs. SNK travels under most projectiles, and also must be blocked in a crouching position, enhancing the move's usefulness.

In the Marvel vs. Capcom series, many of Cammy's special and super moves are endowed with blue flames characteristic of Psycho Power. She also receives the Cannon Revenge, which is a counter move that has her automatically retaliating against physical attacks with a floating punch or a Cannon Spike (this technique was later available to Cammy in Street Fighter Alpha 3 when using her V-Ism incarnation). In these games, she can also double jump or triple jump.
Posted by bluedreamer27 at 2:08 PM