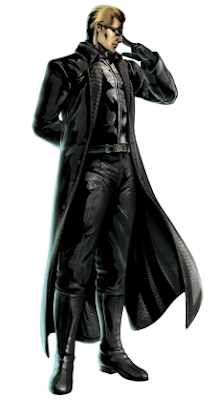 Albert Wesker, the main antagonist of the hit Capcom series Resident Evil and sworn enemy of Chris Redfield and Jill Valentine of S.T.A.R.S. He appears in Marvel Vs. Capcom 3 carrying on his appearance from Resident Evil 5.
Anyone who knows him will tell you that Wesker's true loyalty is power and how to gain more of it. A former Umbrella employee, he made many breakthroughs alongside his colleague William Birkin such as the G-virus and the Nemesis Parasite. He was eventually ordered by Umbrella to lure the S.T.A.R.S. team into the Spencer Estate, in order to test the newly created B.O.W.s that roamed the mansion. When Chris Redfield and Jill Valentine discovered his true motives, Wesker injects himself with a specially engineered virus and has the Tyrant attack him, which seemingly kills him.

In the storyline of Fate of Two Worlds, it is revealed that Wesker, alongside Doctor Doom, has been assembled a group of known villains in an attempt to conquer both universes. Doom, on the suggestion of the Super Skrull, decides to siphon the power cosmic from Galactus and his worldship in order to conquer both worlds. Wesker becomes intrigued with the power cosmic and agrees to assist Doom. Galactus eventually begins to notice the theft and attempts to consume both worlds in retaliation. While everyone is focused on Galactus, Wesker is left to his own devices.

In his ending, after Galactus is defeated, Wesker captures the weakened heroes to use as test subjects with the Uroboros virus.

It should be noted that Wesker lacks command moves that are overheads, making him weak on mixups other than teleport cross-ups, and thus limiting his options on opening his foes' defenses. This can be an understatement however, as Wesker must first put his opponent under pressure and trick them into blocking too much so he can feint into retreats or throws, which is a staple for all characters who use mindgames.