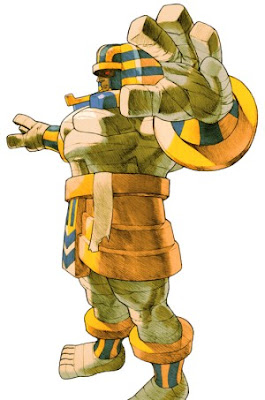 Anakaris is a character from Capcom's Darkstalkers game series. He is the mummy of the twelfth pharaoh of Egypt. Foreseeing his death and revival, Anakaris created a pyramid and a place for his revival. Five thousand years later, he was revived when Pyron came along. In order to rule his kingdom once more, he gathered immense power from battling others and then travelled back five thousand years in time. When his kingdom came to be threatened again, he assumed the form of a mummy again to engage in the battles there. He eventually decided to protect his kingdom by moving it entirely into another dimension. 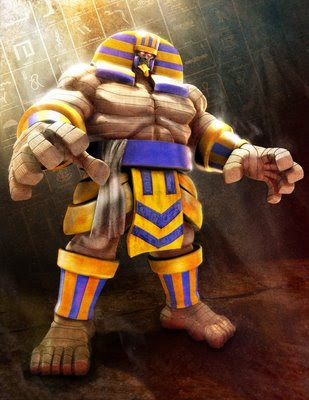 In the second installment of the Marvel vs. Capcom series, Anakaris makes a surprising selection for the Capcom camp. This incarnation of Anakaris is slightly faster and he maintains most of his Darkstalkers moves, with slight exaggerations. One of his new EX Moves is the Serpent Coffin which is an enhanced version of his Cobra Blow. In this variation Anakaris opens his coffin and releases three to four giant serpents at a time thrusting very fast horizontally.
Anakaris possess the most unconventional array of special moves compared to other characters in the series. The Pharaoh’s Curse, a slow moving air-to-ground projectile, turns the opponent into a small vulnerable icon of their original self for a short period of time. During the transformation, the opponent can only jump or move backwards or forwards. This unique move has been a trademark for Anakaris and has become very popular for Capcom as well. Anakaris also has unique projectile moves, which involve him putting his limbs into an entrance portal and coming out another. This takes a considerable amount of time and leaves a huge blindspot between him and his attacking limb.
Posted by bluedreamer27 at 12:06 PM