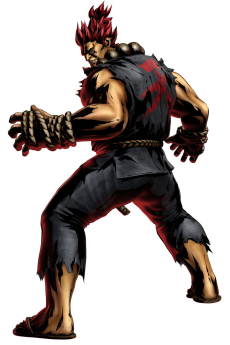 Akuma, known in Japan as Gouki, is a video game character created by Capcom. Originally appearing in Super Street Fighter II Turbo as a secret character and hidden boss, he has red hair, wears prayer beads around his neck, and wears a black gi (occasionally displayed as blue in artwork). The kanji 'ten' (天) - meaning "sky", "heaven", or "providence" - can be seen on his back when it appears during certain win animations. Capcom had stated that the symbol on his back meant "immortal" for Akuma even though there are many different translations. He is voiced by Tomomichi Nishimura in many of the games in which he has appeared. 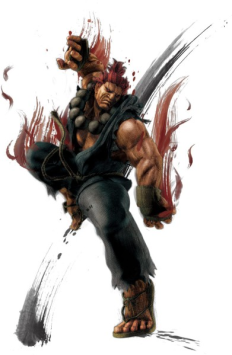 In the Marvel Vs Capcom game, He seems to be "working" with Doctor Doom and his army of villains. However, his true desire is to challenge Galactus himself.
Akuma's considered the first character to debut in the Cross-Over series, since he is a secret character on X-Men: Children of Atom, making him the very first Street Fighter/Capcom character to appear in a Marvel related game.
kuma is one of the sub bosses before fighting Galactus. The other sub bosses are Doctor Doom, Albert Wesker and Dormammu. However, you only fight 2 of them and are randomly chosen.
Akuma is the only character, other than Amaterasu, to not call any character by their real name.
Posted by bluedreamer27 at 10:04 PM