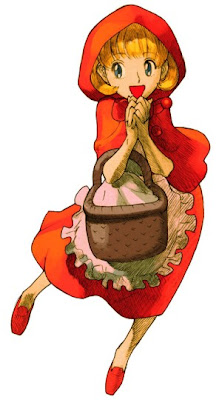 Baby Bonnie Hood also known as B.B. Hood (Bulleta in Japan), is a character from the Darkstalkers series designed by Yoshiki Okamoto. Although she has a cute and innocent appearance (as her name suggests, she physically resembles Little Red Riding Hood), B.B. Hood is a murderous psychopath. As a Darkhunter, she kills Darkstalkers for money. As a homicidal schizophrenic, it is unwise for anyone to stand against her in her pursuit of money. Many look upon her as an antithesis to fellow darkhunters, Donovan Baine and Hsien-Ko.

When creating B.B. Hood, Okamoto stated in his design notes that every Darkstalker character is inspired by something in fantasy, myth, and horror. When creating B.B. Hood however, he wanted to do something a little more sinister. Rather than be based off of an archetype, or a myth, B.B. Hood is inspired by the frightening qualities of the human race itself. When motivated by greed or ambition and fueled by malice, no monster can compare to how terrifying humans can be. This is what B.B. Hood personifies, from her deceptive appearance to her relentless, heartless quest for money. It could even be said that B.B. Hood represents humanity's dark side (she even points it out in her ending in SNK vs. Capcom: The Match of the Millennium: "Violent, stingy, schizophrenic... It sounds... like me!"). These notes were included in the official Japanese strategy guide for Darkstalkers 3.

B.B. Hood's weapons of choice are a seemingly endless number of various armaments that she keeps hidden in her basket. Additionally, she tosses an endless supply of landmines from her pockets. Though a sweet little blonde on the outside, she's a powerful character and is highly psychotic. B.B. Hood is feared by weaker Darkstalkers everywhere. 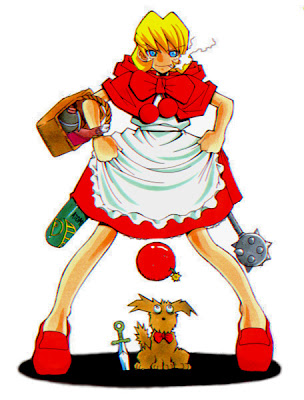 B.B. Hood's profession was founded because droves of creatures from Makai had already flowed into the human world. Many of these creatures have since earned the interest of humans, be it scientific, prejudice, or simple curiosity. Items usable for decorations, materials that don't exist in the human world (such as the liquid and blood from their internal organs) are of keen interest, especially for research for bio-weapons and such. A "Darkhunter" is a job that was born to meet the demand for these clients.
Posted by bluedreamer27 at 5:32 AM