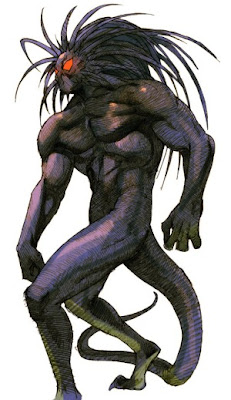 Blackheart is a fictional demon in the Marvel Comics Universe. The character was created by Ann Nocenti and John Romita, Jr., and first appeared in Daredevil (vol. 1) #270 (Sept. 1989). Centuries of murder in a locale named Christ's Crown, New York, draws the attention of a demon-lord, Mephisto, who creates a "son", Blackheart, from the energy of the accumulated evil. Blackheart explored the nature of evil under his father's tutelage, clashing with and failing to corrupt Daredevil and Spider-Man. Mephisto and Blackheart once tormented Daredevil, Brandy Ash, the genetically engineered Number Nine, and the Inhumans Gorgon, Karnak, and Ahura, manipulating their emotions and tricking them. They were soon drawn into hell for worse torments. Brandy Ash did not survive.
Posted by bluedreamer27 at 5:50 AM