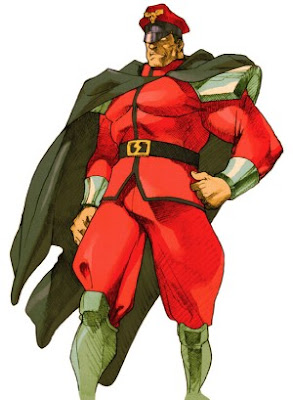 M. Bison, known as Vega in Japan, is one of the primary bosses and antagonist of the Street Fighter fighting game series. His general attire consists of a red military uniform with large silver shoulder plates, wrist bands, and shin guards; on his cap is the skull insignia of his crime syndicate known as Shadaloo (sometimes referred to as Shadowlaw or Shadowloo). Bison's eyes lack both pupils and irises (exception in "Street Fighter II"), leaving them a ghastly white color. He sports a dark colored cape in the Alpha series, in which he appears with his original body. In Street Fighter II and the Capcom vs SNK series, he appears with a much slimmer body, and removes his cape before battle. 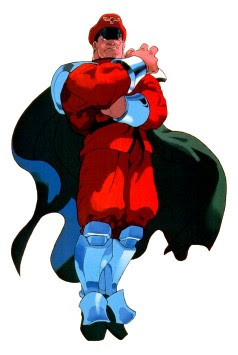 M. Bison is a "charge character" in that, his special moves require that you hold in directions for a few seconds before pulling a move off. One of his special moves is the "Psycho Crusher" which sends him flying in the direction of his opponent with a damaging spin. The "Scissors Kick" allows him to do a forward flip which will knock the opponent away. With the "Head Stomp", Bison jumps into the air and homes into the opponent, bouncing off their heads in which he can follow up and smack them with his own hands.

In the Alpha series, he gained new moves such as the "Psycho shot" which was his very own projectile and a couple abilities which allowed him to teleport and hover in the air.

His Super Attacks contain a more powerful version of the Psycho Crusher (In Alpha 3, it is his most powerful attack taking up the whole screen when used) and the Knee Press Nightmare, which is a more varied version of the Scissors Kick.