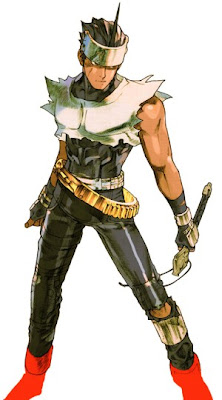 Hayato Kanzaki is the main character of the Capcom series, Star Gladiator. He is a rebellious young Japanese man from the year 2348, where mankind is capable of intergalactic travel and established contact with extraterrestrials. Living on his own and caring about others - especially the children living in the orphanage in which he was raised, and his close friends June, Saturn, and Gamof, this care for people is the driving force that prompts him to go against Bilstein, a mad scientist bent on taking his revenge on Earth. He is the only character in the series to cross over into another Capcom game; in this case, Marvel vs. Capcom 2. 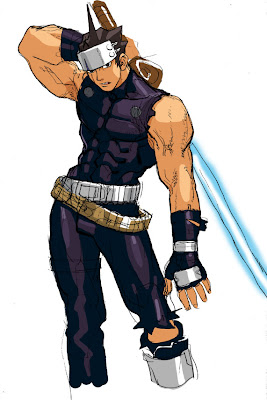 Abandoned on the streets of Neo Tokyo when he was a child, Hayato Kanzaki was taken in by a foster home, owned by a loving caretaker. As he grew older, he noticed that the caretaker was in heavy debt, and wanted to clear it as means of repaying her for her kindness. Unable to find any form of work, Hayato was forced to become a bounty hunter- A line of work that he despised and knew that would go against his fierce sense of justice. As Bilstein escaped from his orbital prison on Zeta and established the dreaded Fourth Empire, the Earth Federation would start the Project: Star Gladiator as its last stand against the madman.Hayato, hearing of this project, sets out to join Star Gladiator to save his home planet and everyone he loves.

walking here with a smile.. have a nice day ~ =D