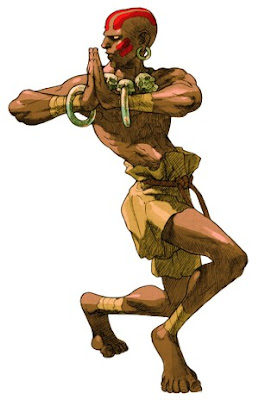 Dhalsim is a fictional character from the Street Fighter series of fighting games. In the story, he hails from Kerala, India. Generally a pacifist, Dhalsim fights to raise money for his village, but realizes that it contradicts his pacifist beliefs. The only significant part he played in the overall story of the series was to make Cammy White self-aware. Dhalsim retired from fighting after the second World Warrior tournament, and continued to roam the world helping those in need.
Dhalsim is the original long-range fighter of fighting games. Dhalsim's intense training has given him the ability to contort and extend his limbs into forms physically impossible in real life; he can project his arms and legs outward in order to deliver attacks that would be out of the range of normal limbs. Dhalsim's fighting style involves keeping the opponent at bay with distance attacks and projectiles, and optimally, only getting close to strike with a surprise aerial attack or sliding kick. Due to his reach advantage, Dhalsim has both very low offense and defense, making it vital for him to avoid sustaining too many blows from a strong fighter. Dhalsim's sprite, while standing, is actually quite a small target, due to the total number of pixels Dhalsim's sprite occupies while not attacking. Dhalsim becomes a much larger target while attacking. As of Super Street Fighter II Turbo, the player can make Dhalsim do only short range attacks by holding back on the joystick. 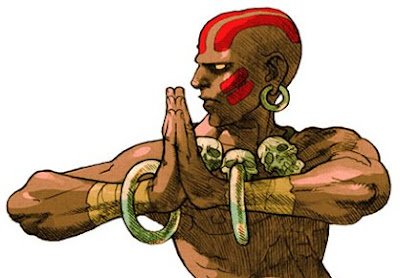 Dhalsim's abilities resemble those of an Indian fighter in the 1976 motion picture Master of the Flying Guillotine starring Jimmy Wang Yu. Like Dhalsim, the fighter in the movie used a yoga-based fighting style and had an unnatural ability to extend his limbs to attack.

Dhalsim's personality resembles that of an Indian mystic; vegetarianism, spiritualism and meditation, and simplicity, as Dhalsim wears very simple attire. Also Dhalsim is aware that if he uses his power to harm, he may become evil, and frequently questions his decisions to use his powers for fighting. In these aspects, he bears a remarkable similarity to Mohandas Gandhi. All forms of yoga are meant to aid a personal journey towards enlightenment and not to harm others. Therefore, Dhalsim is constantly concerned about his fighting style overwhelming his own principles of nonviolence. In contrast, Dhalsim's minimal clothing and necklace of skulls are reminiscent of the medieval Hindu ascetics known as Kapalikas ("skull-bearers") who were often related to macabre imagery such as cannibalism and human sacrifice.