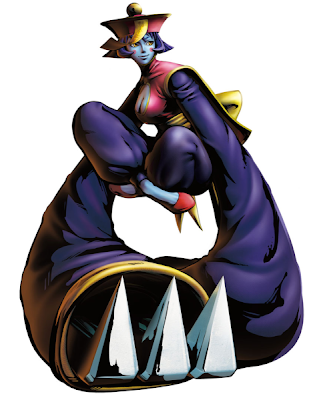 Hsien-Ko (Lei-Lei in Japan) is a video game character from Capcom's fighting game series Darkstalkers (Vampire in Japan). She appears in Marvel vs. Capcom 3 alongside Morrigan and Felicia. She is a jiāngshī, a type of zombie from Chinese folklore.

In Marvel vs. Capcom 3, Hsien-Ko and Mei-Ling try to take advantage of the merging worlds to meet the Sorcerer Supreme of the other world and ask him to save their mother's soul. During her search for Dr. Strange, Hsien-Ko was attacked by heroes who viewed her as an intruder, much to her confusion.

In her ending, the twins finally meet Dr. Strange to make their request. Before Strange agrees, Hsien-Ko asks him if they did something wrong to provoke the attacks from "comic book superheroes." Stephen assures them they did no wrong since they were just trying to save their mother. He proceeds to not only saves their mother, but also makes Hsien-Ko and Mei-Ling human again. However, it is revealed that this was actually a comic book drawn up by Hsien-Ko, while Mei-Ling criticizes its quality.

Originally Hsien- Ko was on the "deconfirmed" list, as an interview with Nitsuma claimed that there would be no more Darkstalkers characters (when in fact this was an error on the translator, as he was only deconfirming werewolf J. Talbain in the original lineup of MvC3), causing her appearance to shock players who had seen the mistranslation.