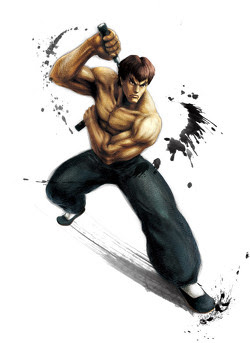 Fei-Long is a character in the Street Fighter series. He is Capcom's tribute to Kung Fu Legend Bruce Lee, who was the actual inspiration for Fei Long's design itself. He first appeared as one of the four "New Challengers" in Super Street Fighter II, which was released in 1993. He later made his return in the Alpha series as well as the Street Fighter 4 series. Other media appearences he has made involve Street Fighter II: The Animated Movie and also the anime, Street Fighter II V. Fei Long is serious most of the time. He is also shown to be calm at times. The best example of this is in his rival fight against Abel, where he is shown to be in a normal mood at first but all of a sudden loses his temper just as the frenchmen repeatedly asks him for a fight. There are also times when Fei Long is shown to be a little cocky. This can be seen by many of his personal actions and also win quotes against certain characters. He is full of fighting spirit as shown in a lot of his win quotes and takes great pride in his fighting style which he seeks to honor it in all ways possible. He also despises all that is evil. 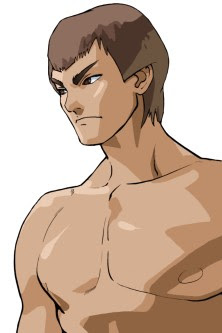 Fei-Long has two special techniques in his debut appearance in Super Street Fighter II. The Rekkaken (烈火拳, Rekkaken? "Blazing Flame Fist") is a series of rushing punches towards his enemy. When the player inputs the Rekkaken command while Fei-Long is already performing the technique, he will follow it with another Rekkaken. He can perform up to three in a row, the third ending in a different cry and a cooldown that plays off of Bruce Lee's notable finale of tensing himself after the final blow.

In Street Fighter 4, Fei Long retains his old Rekkaken punches and Shienkyaku whilst gaining new moves such as Rekkukyaku and Tenshin. The Rekkukyaku involves Fei Long performing a flying kick which he then branches into a front flip kick. The Tenshin is a grab in which Fei Long hooks his leg to the opponents and flips over them. This move allows him to catch the opponent off guard and set up certain combos. He retains his Super Street Fighter 2 Super Combo, the Rekkashinken and gains a new Ultra combo called the Rekkashingeki. It starts with Fei Long doing a couple of Rekkakens which eventually lead to a devastating punch to the opponents mid-section. After that, Fei Long procedes on to deliver a series of fury punches leading to a powerful uppercut which launches the opponent in the air and finishes them off by following up with a ferocious flaming flying kick.
Posted by bluedreamer27 at 7:29 PM