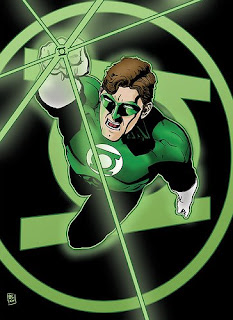 Each Green Lantern possesses a power ring that gives the user great control over the physical world as long as the wielder has sufficient willpower and strength to wield it. While the ring of the Golden Age Green Lantern (Alan Scott) was magically powered, the rings worn by all subsequent Lanterns were technological creations of the Guardians of the Universe, who granted such rings to worthy candidates. These individuals made up the intergalactic police force known as the Green Lantern Corps

After World War II, when sales of superhero comic books generally declined, DC ceased publishing new adventures of Alan Scott as the Green Lantern. At the beginning of the Silver Age of Comic Books in the late 1950s, DC editor Julius Schwartz assigned writer John Broome and artist Gil Kane to revive the Green Lantern character, this time as test pilot Hal Jordan, who became a founding member of the Justice League of America. In the early 1970s, writer Denny O'Neil and artist Neal Adams teamed Green Lantern with archer Green Arrow in groundbreaking, socially conscious, and award-winning stories that pitted the sensibilities of the law-and-order-oriented Lantern with the populist Green Arrow. Several cosmically themed series followed, as did occasional different individuals in the role of Earth's Green Lantern. Most prominent of these are John Stewart, Guy Gardner, and Kyle Rayner.

Each Green Lantern wields a power ring that can generate a variety of effects, sustained purely by the ring wearer's strength of will. The greater the user's willpower, the more effective the ring. The limits of the power ring's abilities are not clearly defined and it has been referred to as "the most powerful weapon in the universe" on more than one occasion. Across the years, the ring has been shown capable of accomplishing anything within the imagination of the ring bearer. Stories in 2006 retconned the ring's long-established lack of effect on yellow objects, stating that the ring-wielder need only feel fear and overcome it in order to affect yellow objects. In one issue Kyle Rayner blows up an entire yellow sun in order to destroy a group of hundreds of unpopulated planets that held deadly sicknesses by manipulating the sun's energy to destroy itself.

Power rings as used by various wielders have exhibited (but are not limited to) the following effects: