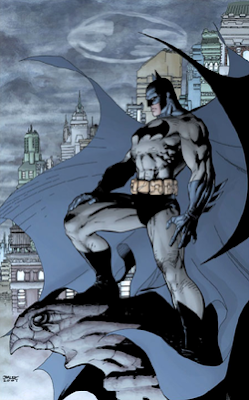 Batman is the superhero protector of Gotham City, a man dressed like a bat who fights against evil and strikes terror into the hearts of criminals everywhere. In his secret identity he is Bruce Wayne, billionaire industrialist and notorious playboy. Although he has no superhuman powers, he is one of the world's smartest men and greatest fighters. His physical prowess and technical ingenuity make him an incredibly dangerous opponent. He is also a founding member of the Justice League and the Outsiders.
Bruce Wayne swore an oath to rid the city of the evil that had taken his parents' lives. He spent his youth traveling the world, training himself to intellectual and physical perfection and learning a variety of crime-fighting skills, including chemistry, criminology, forensics, martial arts, gymnastics, disguise, and escape artistry.
Batman's presence in Gotham City generated a new breed of criminals, no longer the simple thugs and gangsters involved in Gotham Organized Crime, but more dynamic personalities.
Batman, in most of his incarnations, is a dark and grim hero with a personal vendetta against criminals.
Traumatized by the death of his parents, Batman has sworn to rid Gotham from the criminal elements that took his parents from him. He is very paranoid and obsessive, which often makes it difficult for him to trust other people that aren't Alfred, the Robins, or the Batgirls.

Despite this, Batman has proved to have a great love for humanity, which was instilled by his parents. His father was a doctor, while his mother was a crusader against child abuse. Indeed, Batman's oath of vengeance is tempered with the greater ideal of justice. He refrains from killing, as he feels this would not make him any better than the criminals he fights. He is also a very prominent member of the Justice League and the founder of the Outsiders.

To protect his secret identity, Batman has constructed a fake persona he can use in his civilian identity. To the world at large, Bruce Wayne is a self-absorbed, irresponsible playboy and philanthropist. Only his closest allies know that this attitude is just an act.

The Bruce Wayne/playboy aspect of his character is a facade, while the masked and particularly dark, grim vigilante is marked as the "true" man.

Oh, thats cool. I only know batman as the caped super-hero and never know his background. thanks mate