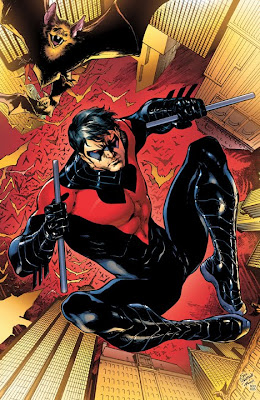 For many years, Richard "Dick" Grayson was Batman's sidekick Robin.The name "Robin the Boy Wonder" and the medieval look of the original costume were inspired by the legendary hero Robin Hood, as well as the red-breasted American Robin, which continued the "flying animal" motif of Batman. Young Dick Grayson was born on the first day of spring. His mother nicknamed him "little Robin". Dick Grayson was a twelve-year-old circus acrobat, the youngest of a family act called The Flying Graysons of The Haley Circus. Dick joined the act at a very young age, having been trained in acrobatics from birth.
The formation of the Teen Titans mainly happened due to the sidekick's mentors making them feel lesser of themselves, which they quickly knew wasn't right about them. Together, they cured the heroes from their mind control; later, their mentors (Batman, Flash, Aquaman, and Wonder Woman) supported the idea of the teens becoming a heroic group, the Teen Titans! Dick became the leader of this team.
Dick continued his adventures with Batman, and began attending college at Hudson University. Robin started to take on solo missions as well, and found himself to be a capable crime-fighter in his own right. Shortly afterward, the mysterious Raven summoned Dick Grayson, and several other young heroes, to form a new group of Titans. Robin again resumed leadership, and moved out of the shadow of the Batman.
Dick rediscovered his self-worth among the Teen Titans. Batman, however, was less than pleased. He informed Dick that if he no longer wanted to be his partner, then Dick would have to retire as Robin.
Dick Grayson has almost reached Batman to a point and is believed literally and figuratively to be his successor. Dick Grayson possesses the peak human strength of a man that has intense physical workouts at the height and weight of 5'10" 175 lbs. He is able to lift at least twice his own body weight; enabling to press lift 350 lbs.
Posted by bluedreamer27 at 3:59 AM