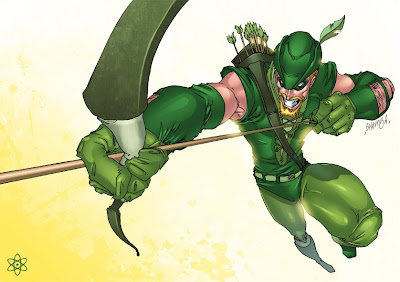 Green Arrow is a vigilante superhero who fights crime using archery, martial arts and technology. In his secret identity he is Oliver Queen, living in Star City as a wealthy playboy and billionaire industrialist turned outspoken liberal politician. He is the leader of Team Arrow; he has also been a member of the Justice League and the Outsiders.

As a young child Oliver idolized his hero Robin Hood and was said to be a natural archer, frequently practising with his bow and arrows. He was mildly traumatized the first time he accidentally killed an animal, but when his mother and father were mauled by lions in a tragic safari accident his hesitation to shoot cost them their lives.

Afterwards he was raised by his uncle and eventually inherited the family fortune and business. Queen grew into a rich thrill-seeking drunken playboy with no real sense of responsibility or direction in his life. Everything changed when he fell off his boat in the middle of the ocean and washed ashore on the remote isolated Starfish Island, clutching a bow – a memento from a Robin Hood movie – which he had used to keep himself afloat, where he was completely stranded. During this time spent without food or shelter Queen developed his skills as a hunter to survive and gained mastery over his bow. Having previously taken everything in his life for granted, this experience taught him self-reliance and made him into a man. His second test of new character was the discovery of drug smugglers on the island run by the ruthless international crime lord China White. Using his new skills, he attacked and destroyed their heroin operation, then delivered them to the authorities before returning home. Realizing that he had found his destiny, he chose to use his abilities and resources as a crime-fighter.With a nickname coined by the press, he made it his mission to protect Star City. He took his cue from Batman and built his own "Arrow Cave," complete with an "Arrow Car" and allegedly a yellow submarine. He and Speedy fought with trick arrows that were designed to be non-lethal.

Oliver Queen's powers, if any, remain unknown. It has been rumored that Green Arrow may in fact be a metahuman. The Department of Extranormal Operations has a classified dossier on Queen, wherein they indicate such a possibility, but as of yet, this information has not been confirmed nor denied He used to own and fly his own airplane called the Arrowplane. He still has some skill in flying different types of planes.
Oliver Queen is perhaps the finest archer ever known. He claims to be able to shoot 29 arrows per minute (he stated this himself, in the Sound of Violence story arc, when he corrected Black Canary for saying 26). He has a wide-variety of trick arrows, ranging from bola arrows to time-bomb arrows to his infamous boxing-glove arrow. In recent years he has used these arrows sparingly, preferring the time-tested simple arrow. Green Arrow has shown the ability to shoot an arrow down the barrel of a gun, pierce a drop of water as it leaves a tap, and shoot almost any part of the human body; although he aims only to wound and not kill when he shoots. He once shot two arrows down two different gun barrels while upside down, in mid-flip while somersaulting off a building.
He is proficient in several forms of hand-to-hand combat including Judo, Kickboxing and Karate. Proclaimed as a martial arts master, he has shown the ability to take on seven people at once. He spent several months dedicated to making himself a better fighter and trained with many of the world's finest martial arts teachers and even went through training from Natas, the same person who trained Deathstroke
Ollie is also very proficient with a sword, though it is not his preferred weapon of choice. He has beaten Jason Todd in a sword-fight and has deflected an incoming arrow with the sword he carries.
He has displayed on many occasions that he is an expert in acrobatics, and often uses this skill while evading enemy fire.
Despite his chronological age, Oliver Queen possesses the strength level of a man ten years his junior, who engages in intensive regular exercise. After his survivalist training in the Marshall Islands, Ollie is now in peak physical condition. Ollie can at least lift up to twice his body-weight enabling him to press 390 lbs. His strength makes him capable of swinging uninjured with a grapple device.
Posted by bluedreamer27 at 7:02 PM