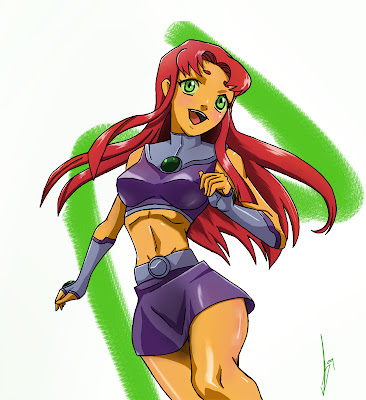 Starfire is an alien super-hero with powers of flight and energy projection. Born a princess on the planet Tamaran, she escaped execution at the hands of her older sister Blackfire and traveled to Earth. Meeting the Teen Titans, she became a charter member and stayed with the team for most of her career. Her culture's different standards of intimacy cause her to be extremely open and sexually liberated by human standards. She has also been a member of the Justice League, Outlaws, Outsiders and R.E.B.E.L.S..

Presumably because English is not her first language, Starfire speaks without contractions, and misuses idioms (e.g. "Kick the butt!" as opposed to "Kick butt!"). This also may be due to her being Tamaran's princess and future queen--she cannot forget her manners that she learned in the palace. Additionally, she uses several Tamaranian nouns, such as "bumgorf" (parental term of endearment or simply my child or sweetie), "K'norfka" (parent or guardian), and "shlorvak" (dream).

Starfire is naive and somewhat insecure, but her naivete is not to be mistaken for stupidity. It is this naivete that endears her to others, especially to Robin, who occasionally shows signs of romantic interest in Starfire. An alien and an outsider, she is still rather new to Earth and its customs.
Starfire takes friendship very seriously, and is easily distressed when others, especially her friends argue or fight. Like all Tamaranians Starfire can fly up to speeds that are ten times faster than light. Stafire can project bright green glowing circular bursts of "starbolt" energy from her hands (including her fingers). Starfire also has the incredible ability to survive in the vacuum of space without any sort of protection or survival gear. Starfire, like many Tamaraneans, is allergic to Metallic Chromium. When she sneezes, she unleashes her bright green glowing starbolt energy out her nose and mouth which is highly destructive.
Posted by bluedreamer27 at 6:15 PM