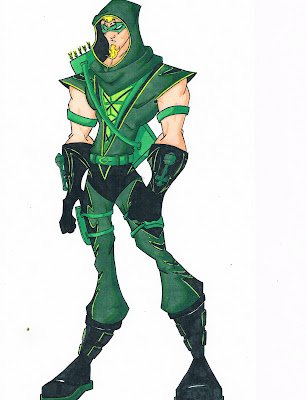 Green Arrow is a vigilante superhero who fights crime using archery, martial arts and technology. In his secret identity he is Oliver Queen, living in Star City as a wealthy playboy and billionaire industrialist turned outspoken liberal politician. He is the leader of Team Arrow; he has also been a member of the Justice League and the Outsiders. As a young child Oliver idolized his hero Robin Hood and was said to be a natural archer, frequently practising with his bow and arrows. He was mildly traumatized the first time he accidentally killed an animal, but when his mother and father were mauled by lions in a tragic safari accident his hesitation to shoot cost them their lives. ealizing that he had found his destiny, he chose to use his abilities and resources as a crime-fighter.With a nickname coined by the press, he made it his mission to protect Star City. He took his cue from Batman and built his own "Arrow Cave," complete with an "Arrow Car" and allegedly a yellow submarine. He and Speedy fought with trick arrows that were designed to be non-lethal.
Green Arrow began developing a personal crisis about which of his identities was more important and doing more good, the crime-fighter or the politician.
Oliver Queen has a very dynamic personality. His passion and intensity make him strong, although he has always had difficulty finding direction in life. Born into wealth, he didn't need to work for most of what he had and was raised with very little responsibility. His experience on Starfish Island taught him self-reliance and showed him there was more to existence, giving him an outlet. In the beginning of his career he has been portrayed as a thrill-seeker, fighting crime not for moral reasons but the sense of adventure. It wasn't until he lost his fortune that he developed his strong social conscience, and outspoken left-wing political viewpoints. This character development has made him much less egotistical in the way he deals with problems.
His attitude towards women has been shown to vary over the years, although he is consistently more attracted to dangerous types. Oliver was originally shown to be a very faithful and enduring partner to his long-time love interest Black Canary, although he has committed infidelity, and retcons to his personality have made him more womanizing.
Posted by bluedreamer27 at 4:26 AM