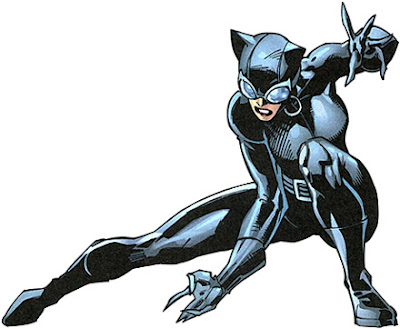 Selina Kyle's early life was defined by tragedy. When she was just a girl, her brutalized mother Maria committed suicide and her violent father Brian drank himself to death soon after. Separated from her younger sister Magdalena and remanded to the Sprang Hall Juvenile Detention Center, an abusive state home for orphaned or delinquent girls, she opted instead to take her chances on the streets of Gotham City. Amid the crime and corruption of the poverty-stricken East End district, she survived through petty theft. Sharp wits and an amazing natural skill as a gymnast led to her becoming the slickest cat burglar the Gotham City Police Department had ever dealt with. To protect herself, she studied martial arts. She would have continued to rob with impunity if not for the Batman. Spying the Caped Crusader from her window on one of his first outings, she watched him in action and was suitably inspired to take up her own costume when prowling the Gotham night. Although originally introduced as an equal opponent for Batman, Catwoman's status as hero or villain is ambiguous; she has her own moral code (she abhors killing, though did eventually kill Black Mask) and has occasionally teamed up with Batman and other heroes against greater threats, even saving the lives of the entire Justice League on one occasion. She represents a gray area in Batman's otherwise black and white life where the line between good and evil blurs, and his attraction to her stems from this perception that, in her way, she's kind of a female version of himself: another dark, beautiful creature that prowls the night. Catwoman, in her first appearance, wore no costume or disguise at all, and it was not until her next appearance that she donned a mask, which was a theatrically face-covering cat-mask that had the appearance of a real cat, rather than a more stylized face mask seen in her later incarnations. Later, she wore a dress with a hood that came with ears, and still later, a bodysuit with attached boots and either a domino or glasses-mask.
While not considered superhuman, she is easily the fastest non-metahuman around. She literally moves like a cat! Selina is a gifted and accomplished athlete, with heightened acrobatic prowess. Catwoman has an good affinity for cats. Feline species tend to flock to her, accepting her almost immediately, recognizing somehow that she is not an enemy but a friend. This allows her to calm injured cats, train them, befriend them, and form strong bonds with them. These animals will even sometimes come to her defense when she is attacked. Catwoman possesses the peak human strength level of a woman her age, size and weight, in addition who engages in intensive regular exercise and combat training.
Posted by bluedreamer27 at 4:34 AM