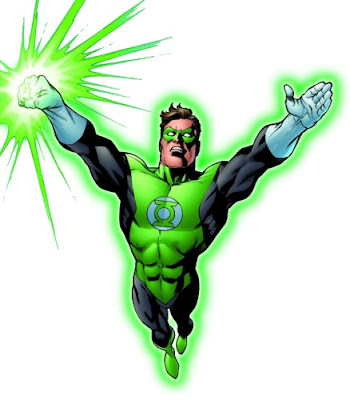 Hal Jordan is the most well-known Green Lantern. He was the first earthman ever inducted into the Green Lantern Corps, and has been heralded as possibly the greatest Green Lantern of all time. Green Lantern is also a founding member of the Justice League of America. Hal has also been known as Parallax and the Spectre. Hal Jordan was born in Coast City on February 20th, to parents Martin Jordan and Jessica Jordan, the middle of three children with older brother Jack and a younger brother Jim. As a young child, he idolized his father, a test pilot who worked for Ferris Aircraft. At a very young age, he had to face his greatest fears when his father died in a plane crash right before his eyes. Despite his family's wishes, he followed in his father's footsteps and eventually joined the United States Air Force on his 18th birthday – turning up that very morning outside the Armed Forces Career Center before it had even opened. Many years later, a dying alien named Abin Sur, member of the Green Lantern Corps, crash-landed his ship in the Californian desert. Having selected a replacement officer for his position, the power ring chose Hal Jordan for his ability to overcome great fear. The ring and its abilities were explained to him, and he inherited the mantle of Green Lantern.
As Green Lantern, Hal Jordan patrolled the galaxy and took on many missions in space. Green Lantern was one of the founding members of the Justice League of America, along with the Flash, Aquaman, Martian Manhunter and of course, Superman, Batman, and Wonder Woman. This group first banded together when they met to fight Appellaxians invading the planet, and realized that they worked much stronger as a team than any of them could have individually.

Hal is a righteous hero with a strong willpower and an ability to overcome great fear. Those traits are what make him worthy of becoming a Green Lantern. Having a strong sense of right and wrong, Hal is guided by his own conscience rather than the general rules that most of the Green Lanterns follow. One of his most notable traits is his refusal to admit defeat even in the darkest of situations, which has allowed him to achieve victory even in the most difficult odds.

Despite his virtues, Hal is also reckless and arrogant. More than once he has left his emotions cloud his better judgment, something the Guardians berate him for. Also, Hal is especially hard on himself for allowing Parallax take control of him, which resulted in the destruction of the Green Lantern Corps. But as time passes, Hal is able to overcome his guilt and move on with his life. As a normal human being, Hal does not possess any permanent superpowers. However, when he wields his Green Lantern Ring, Hal is able to fly, shoot laser beams and create constructs from the Green Light of Willpower. Hal posseses no superhuman powers, but with his Green Lantern Ring , he can do many things that a normal human cannot like fly, create solid light constructs, forcefields, and anything the ring and his imagination will allow him to do.