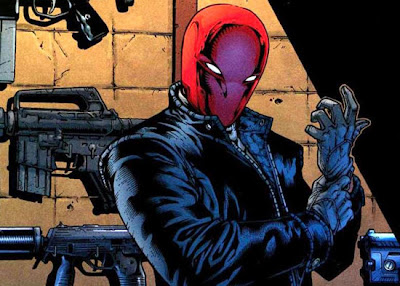 Jason Todd is a vigilante anti-hero who has been a member of and antagonist to the Batman Family. Batman originally trained him to be the second Robin, his new side-kick after Dick Grayson became Nightwing. Jason is murdered by the Joker during A Death in the Family, although he is later resurrected and returns as the second Red Hood during Under the Hood. Jason Todd was a young street orphan who first encounters the Dark Knight while attempting to steal the tires of the Batmobile. Bruce Wayne sees to it that Jason is placed in a school for troubled youths. Jason earns the mantle of Robin a short while later by helping Batman apprehend a gang of thieves. However, Todd does not wear the Robin costume (an improved version of) until after six months of training. Batman realizes that while Jason doesn't possess Dick Grayson's acrobatic skills, he can become a productive crimefighter by channeling his rage. He also believes that if he doesn't help the boy, Jason will eventually become part of the "criminal element." Jason also aided Batman while Gotham City was temporarily overrun by Deacon Blackfire. Unlike Grayson or the pre-Crisis Jason, the post-Crisis Jason is impulsive, reckless, and full of rage. Even on missions in which Batman orders him to conduct surveillance, Jason attacks, ruining months of planning. Jason also uses excessive force to subdue criminals. As Jason's rage and dangerous behavior get worse, Batman has no choice but to suspend Jason from active duty. Angered by this decision, Jason walks out on Bruce and heads back to his old neighborhood.
It is later revealed that Jason indeed had died at the hands of the Joker, but when Superboy-Prime alters reality from the paradise dimension in which he is trapped (six months after his death), Jason is restored to life and breaks out of his coffin, but collapses thereafter and is hospitalized. Shortly after the events of War Games and War Crimes, Jason Todd reappears in Gotham City as the Red Hood, hijacking a shipment of Kryptonite from Black Mask. The Red Hood assumes control over several gangs in Gotham City and starts a one-man-war against Black Mask's criminal empire. Over all, he strives to cleanse the city of its corruption, such as drug dealing and gang violence, and to kill the Joker in revenge for his own death. Because of his anti-heroic activities he repeatedly comes to blows with Batman and several of his allies.
Posted by bluedreamer27 at 5:05 AM