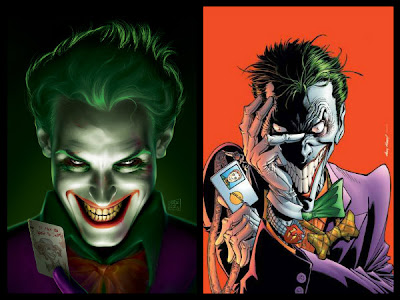 The Joker, real name unknown, is a homicidal maniac and the archenemy of Batman. Although his full origin is unknown, the Joker is known to have been forced to swim through a vat of chemicals which turned his skin white, his hair green, and left his faced permanently locked in a double Glasgow Grin. Completely unpredictable with no regard for human life, the Joker finds murder and mayhem funny, and is perhaps the most dangerous man on New Earth with a body count stretching into the thousands, all centered around his obsession with destroying the Dark Knight.
Cruel and sadistic as he is, the Joker has a human side. Before his accident, nobody thought he was worth anything special, and all he wanted to do was prove his worth. Now emotionally scarred by life's tragedies, he merely desires to extend his amazing sense of humor to the point where people finally see who he is meant to be-a star. However, with Batman foiling his every comically-ridden crime, he feels he may never get that chance, so he attempts constantly to prove himself to Batman as special, so maybe the Dark Knight will leave him be. This is a false hope, however, as Batman will always be there to rid the city of turmoil, no matter how much pain it causes the Joker.
The Joker's insanity appears to be a strange mixture of violently aggressive psychopathy, nihilism, and fixated narcissism. He has frequently been shown to have no regard for human life, and treats the pain and suffering of others as personal sport.
Due to his chemical submergence, Joker has gained beyond average advantages over normal humans as well as further exposure has tainted his physiology. Joker is portrayed as highly intelligent and skilled in the fields of chemistry and engineering, as well an expert with explosives. The Joker has moderate skill in hand to hand combat. Over the years it has been shown that although Batman is stronger, the Joker is faster and more agile. Joker possess the strength level of an average human male who engages in regular moderate exercise though has at times due to adrenaline surges surpassed his normal levels; Athletic. However, he is mostly shown to be of weak physical strength.
Posted by bluedreamer27 at 12:37 PM