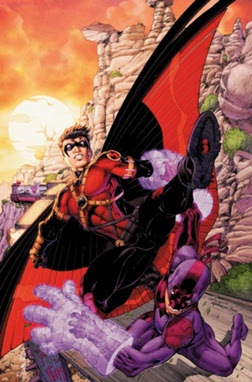 As a small boy, Timothy Drake attended the circus the night the Flying Graysons were murdered. A few years later, he saw footage of Batman and Robin apprehending the Penguin. Robin performed a quadruple somersault, a rare maneuver that only Dick Grayson and a few others could perform. After learning Grayson was the ward of Bruce Wayne, he came to the conclusion that Wayne was Batman.

Tim continued to follow the adventures of the Dynamic Duo, as well as Grayson becoming Nightwing and Jason Todd succeeding him as Robin. After Jason's death, Timothy became convinced that a replacement was needed. Tim had his doubts about becoming the new Robin, but Bruce told him that he had every confidence in Tim being his new partner. Bruce also confided in Tim that he was looking for someone with smarts, not just guts, and Tim had that and more. All that was necessary was that Tim go through some intensive training before taking to the streets in Gotham.

Much like Dick Grayson, Tim Drake has allied himself with the other superheroes in his age demographic. He mostly worked with the Gotham City heroes, but on occasion joined forces with other heroes such as Superman, the Flash, Superboy (who became Tim's best friend) and Impulse. Tim possesses no known superhuman powers though is suggested to have a far beyond normal mental concentration and mental focusing ability that allows him to think and calculate beyond most human beings. Through continuous intense training, Tim possesses peak level strength, stamina, speed, reflexes and agility for a teenager.