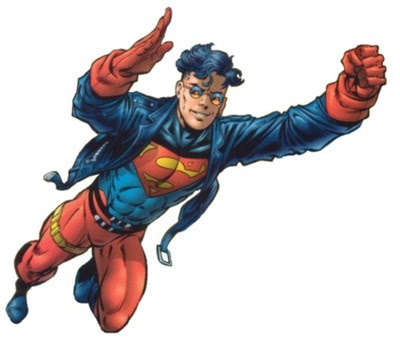 Superboy is a clone grafted with Superman's DNA (as opposed to a younger version of Superman), who was introduced in 1993. He was created by Project Cadmus to replace Superman following the Death of Superman story, and was artificially aged to mid-teens and implanted with the necessary knowledge of someone his biological age (in regards to general studies, such as math, reading, etc). Before the experiment could be completed (i.e. aging him to full adulthood and implanting him with safeguards to control him), he was freed by the Newsboy Legion and escaped. One of the boys gave him a leather jacket before he set out into the city (having his first brush with being Superman when he encounters Sidearm attempting to rip off an ATM). When Superboy arrived in Metropolis, he went by "Superman" and had no real name. While glibly asserting he was the original Superman, he quickly rebuked any insinuation he was the original Superman. In fact, he told anyone who'd listen that he was a clone of Superman. Superboy loved the limelight, but was not particularly cautious at first. Steel had to have some words with the Kid about not trying to be Superman just for the glory after Superboy's carelessness inadvertently led to the death of a Daily Planet chopper pilot.
Superboy is approached by Supergirl to work with her at LexCorp. Superboy and Supergirl work together to save lives, pulling many people from cars that fell into the river, before Supergirl is left with the unhappy job of telling Luthor that Superboy turned down his offer.
Superboy was a founding member of the team Young Justice, along with Robin (Tim Drake) and Impulse. The team formed after the three boys decided to have a "camp out" in the old JLA Justice Cave, where they encountered Red Tornado (who agreed to keep an eye on them)
Superboy is a clone of Superman and Lex Luthor, as such he is both Human and Kryptonian. This affords Superboy with telekinetic abilities as well as an alien physiology. Although some of the abilities are subject to change due to age and gene manipulation below is a list of exhibited superhuman abilities. uperboy's human DNA was physically altered to allow him not only advanced brainpower but actual telekinetic powers. Visible only in the form of red wavelengths emanating from Superboy and the subject of the telekinesis; his ability allows him to fully lift and manipulate objects in any way his mind can think of. His power is not always on and he must think about each move before he can make it. He's exhibited his telekinetic ability in many creative ways.
Posted by bluedreamer27 at 4:56 AM