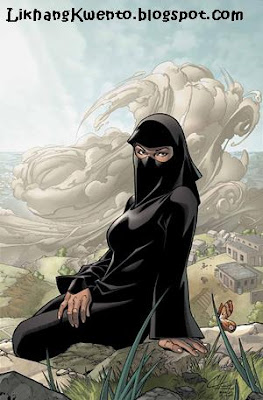 Dust (real name Sooraya Qadir), is a fictional character in the Marvel Comics X-Men-related series. Sooraya is a mutant with the ability to transform her body into a malleable cloud of dust. The X-Men travel to Afghanistan to rescue Sooraya, whose abilities made her the target of slavers. Born in Afghanistan, Sooraya is attacked by a slave trader attempting to remove her traditional niqāb; almost instinctively, she lashes out with her powers and flays him alive with her sand-like dust. The X-Men, having heard the situation, traveled to Afghanistan and rescue her, where she is brought to America and becomes a student of the Xavier Institute for Higher Learning. After the actions of the scarlet witch (in which millions of mutants lost their powers), Sooraya remains one of the few mutants to keep their powers after the event. She is currently a member of the Young X-Men team. She is a rare example of a positive Muslim comic book character. 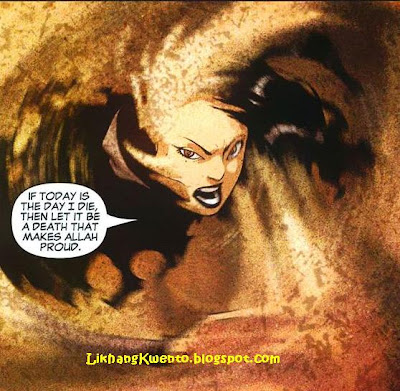 Dust can transform herself into an explosive cloud of sand-like silicon particles and maintain control of her sand form (for instance scouring the flesh from her enemies' bones like a sandstorm, shredding steel, or forming a human-shaped body), before reforming at will. However, telekinetic or similarly powered beings can take control of her sand particles. According to Jean Grey and Professor X, her dust form makes her harder to detect telepathically and according to New X-Men vol. 2 #42 somewhat resistant to magic.Dust has also demonstrated a major weakness to water. Her sand form has been stopped by being doused with water several times in combat. She can also be defeated if the air she travels through is manipulated (such as during her fight with Wind Dancer). Her sand form is also vulnerable to extremes of heat, causing it to crystallise into glass, paralysing her. Like many transmorphs, she reverts back to her human form if exhausted or knocked unconscious.