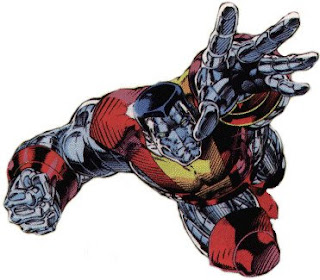 Colossus (Piotr Nikolaievitch Rasputin) is a fictional character, a superhero in the Marvel Comics universe. . A Russian mutant, the character is a member of the X-Men, and is by far the physically strongest X-Man. Even without his powers he still cuts a physically imposing figure standing at 7'5". Throughout the series he has been portrayed as a quiet, shy character, honest and innocent. He's now a man without a family, having lost all whom he's ever loved including his parents, brother, sister and even Kitty PrYde , his primary romantic interest. He has had a fairly consistent presence in X-Men-related comic books since his debut. Also a talented artist, he only reluctantly agrees to use his powers in combat, feeling it is his responsibility to use his abilities for the betterment of human and mutant-kind.

Colossus is a mutant that has the ability to transform his entire body into a form of 'organic steel', with properties analogous to osmium but of still unknown composition. Colossus cannot transform a portion of his body into this armored state; he must either transform completely or remain within his normal state. When he transforms, he gains around a foot in height and his weight is at least doubled. In his armored form, Colossus possesses superhuman levels of strength, which currently slightly exceeds that of The Thing, as well as superhuman stamina and durability.

His physical strength is currently greater than when he first joined the X-Men, since he was a teenager at the time. While in his armored form, Colossus requires no food, water, or even oxygen to sustain himself, and is extremely resistant to injury. He is capable of withstanding great impacts, large caliber bullets, falling from tremendous heights, temperature extremes of hot and cold, electricity, and certain magical attacks. It has been shown that he is vulnerable to the anti-metal vibranium in his metal form, his body instinctively shifting to human form when faced with a vibranium weapon.
Colossus is also an excellent hand-to-hand combatant, having received training from Wolverine and Cyclops. He also has had training in acrobatics and sword fighting from Night Crawler . In his human form, he is exceptionally strong and fit, though not superhumanly so. He has also completed college-level courses at Xavier's school.