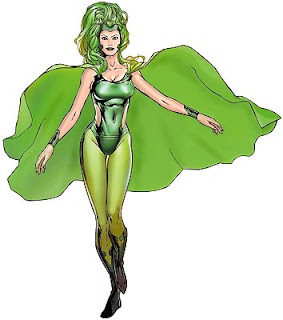 Polaris (Lorna Dane) is a Marvel Comics superhero, a member of the X-Men. Created by writer Arnold Drake and artist Jim Steranko, she first appeared in X-Men #49 (October 1968). A mutant, Polaris can control magnetism. She has a long-held suspicion that Magneto is her biological father. She has had a complicated long term relationship with the X-Man Havok, to whom she was engaged. As the daughter of Magneto she is the half sister of the scarlet witch and Quicksilver.

Polaris' mutant powers, which were originally dormant, enabled her to sense and control magnetism, including manipulating metals which are susceptible to that force. She can also manipulate the Earth's magnetic field to allow herself to fly, generate magnetic energy pulses, and create force fields. By concentrating, Polaris can perceive the world around her solely as patterns of magnetic and electrical energy. She can perceive the natural magnetic auras surrounding living beings as well. She has bright green hair, the first indication of her mutation. At first, she dyed her hair brown to hide this. In recent comics, she appears with her characteristic green hair.

Earlier in her history, Polaris lost her magnetism power, but gained the ability to absorb negative emotions from the environment and use it as strength, endurance, invulnerability, and the ability to temporarily increase her height and mass. She also became more violent during this time, presumably because of the negative emotions she was storing within. Those around her also became more volatile and aggressive. Under the Shadow King's influence, the range of this effect was vastly increased, reaching at least from Scotland to Egypt. She eventually lost these additional powers and her original magnetic powers returned.

Lorna possesses expertise in geophysics, and has earned a Masters degree in that field.
Posted by bluedreamer27 at 9:21 AM