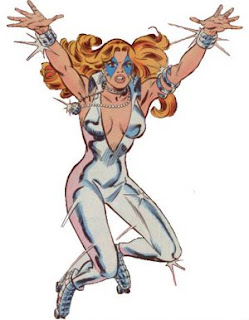 A mutant with the ability to convert sound vibrations into light and energy beams.Despite the fact that Dazzler was originally commissioned as a disco singer, the character shifted to other musical genres, including rock and adult contemporary. She starred in a self-titled solo series in the early 1980s, and later joined the cast of the X-Men. She was briefly a member of the spin-off group Excalibur but now has re-joined the X-Men.

Dazzler is a mutant with the ability to transduce sonic vibrations which reach her body into various types of light. This ability seems to operate over a great range of frequencies, including the audible spectrum, and a great variation of sound pressure levels regardless of the complexity, dissonance, or randomness of the sound. For example, a car crash and a symphonic passage of equal duration will both produce usable incoming acoustic vibrations.
Dazzler, however, prefers utilizing the sound of music, particularly that which is rhythmically sustained. Not only is music more pleasant to her ears, but the steady beat of contemporary music provides a more constant source of sound to convert. The precise means by which this conversion process works is as yet unknown. Left undirected, Dazzler's light will radiate from her body in all directions, producing regular flashes of white light. By conscious control over the light she produces, she can control its direction, frequency (color), amplitude (intensity), and duration.
Since studying with the X-Men, she has become adept at directing her blinding strobe light blast from her eyes. Dazzler has also learned how to create a destructive shield about herself with laser light that can vaporize oncoming projectiles. The most powerful manifestation of her abilities is a concentrated beam of solid photons she usually fires from her right index finger. The beam is extremely powerful and as a consequence uses a great deal of her energy reserves. She has since learned how to produce these blasts without draining herself, while still providing them with considerable power. She has also recently shown the ability to form her photon emissions into solid constructs, such as swords and staffs. Dazzler's potential to convert sound to light is unlimited. Curiously, she cannot use her own unamplified voice as a source of sound for her transduction abilities. Dazzler's body, especially her eyes, shields itself against any injurious effects of her light transducing abilities and against those of bright lights in general. Her ability to transduce sound also protects her from being deafened by loud noises.

Dazzler is a highly skilled athlete, and has become an excellent hand-to-hand combatant thanks to her training with the X-Men, and with the Gladiators. In addition, she is a talented singer, actress, and dancer. She is also a highly accomplished roller skater and can move at high speed; she occasionally wears a pair of roller blades which magnetically adheres to her boots.

Thanks to Professor X , Dazzler's costume contains devices that enable her to store sonic energy more efficiently and to gauge and focus the light she generates with greater skill. She formerly carried a customized radio/cassette tape player to provide her with sound until she acquired the sound storing devices in her costume.

Email ThisBlogThis!Share to TwitterShare to FacebookShare to Pinterest
Labels: Dazzler