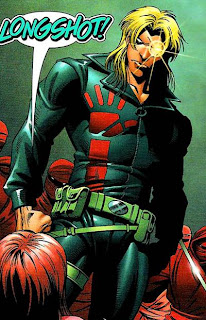 Longshot is a fictional Marvel Comics superhero best known as a member of the X-Men.
He is one of the few X-Men (along with Wolverine , Cable, and Banshee) to have a relatively well defined archenemy apart from Magneto.

Longshot was created through genetic engineering by Arize. Longshot has only three fingers and an opposable thumb on each hand. He also has leather-like skin, hollow bones and two hearts, giving him superhuman speed, agility, endurance, and reflexes. He has exhibited advanced healing abilities as well.
He has a star shaped scar on his left eye from being branded. The scar is only visible (glowing brightly) when Longshot uses his superhuman powers. He was genetically engineered and augmented by magical means to have certain superhuman abilities. The mystical augmentation gave him the ability to affect probability fields through psionic means in order to give himself "good luck" in his activities. This allows incredibly unlikely events to happen in Longshot's favor. This power operates even when Longshot does not consciously will it to do so. This ability is tied into the positive aspects of his personality: should he attempt to use his powers for a selfish or evil act, or should he give up hope, his powers will fail to function or even backfire, giving him bad luck. By creating "good luck" for himself psionically, Longshot creates an equal and opposite effect elsewhere, thereby creating "bad luck" that may affect someone else or even Longshot himself.

Longshot carries cleaver-like blades, stored in a bandoleer, which he hurls with inhuman accuracy or in some cases, completely dependent upon his luck powers. He is also shown as proficient in other types of bladed weaponry. During his X-Men years, Longshot also carried a folding grappling hook and rope either carried looped around one shoulder or stored in his shoulder bag, and a set of throwing spikes which produced net-like wires between them to restrain a target.

Longshot is an extraordinary acrobat, and has superhuman agility due to having hollow bones but musculature like an Earthman's.

Email ThisBlogThis!Share to TwitterShare to FacebookShare to Pinterest
Labels: LongShot