Gambit (Remy Etienne LeBeau) is a fictional character, a Marvel Comics superhero that has been a member of the X-Men.
As a mutant, Gambit possesses the ability to manipulate kinetic energy, as well as a hypnotic charm. He is also skilled in card-throwing, hand-to-hand combat, and the use of a staff.
Originally a professional thief, few X-Men trusted Gambit when he first joined the group. There was consistently a source of stress between him and his on and off, although longterm, love interest Rogue. This was exacerbated when his connections to villain Mister Sinister were revealed, although some of his team members accept that Gambit honestly seeks redemption

As the X-Men's self-described ladies man, Gambit has shown a more vulnerable side of himself over the years, especially when it comes to Rogue. Gambit remains fiercely proud of his Louisiana heritage, and speaks in a very thick Cajun accent.
One of his older traits is that he used to be a smoker, along with Wolverine and various other characters. However, with Marvel EIC Joe Quesada's anti-smoking policy, this trait has completely vanished. During the Wolverine/Gambit limited series Gambit admits he is considering quitting.

Gambit is a mutant whose primary ability is the manipulation of energy. He uses the bio-kinetic energy his body produces to convert the potential energy of non-organic matter into kinetic energy. The conversion process, referred to as charging, often results in a violent and powerful explosion. The explosion is proportional to the size of the object. With the first demonstration of his powers, he charges an object using his mind rather than through physical contact. Because energy charges his body, Gambit has greater strength, stamina and agility than any non-powered human.

At his full power, Gambit is able to charge any organic or non-organic matter within his line of sight through thought. The failure to control his abilities in his youth forced him to turn to Mister Sinister, who excised the portion of his brain stem responsible for his full abilities. Later, while he is trapped in Victorian England, he returns to Sinister to have his grey matter reimplanted, restoring his abilities to their full potential. He uses his powers to return to present-day by transforming himself into living energy which joins with the kinetic flow of the timestream. With access to his full power, Gambit is able to manipulate the potency of his bio-kinetic energy to burn, cause molecular discomfort, incinerate and create timed detonations. However, he burns out his powers after fighting New Sun. He regains them with Sage's help. Gambit is also able to heal himself by stimulating his cellular activity, although this ability has only been demonstrated once. 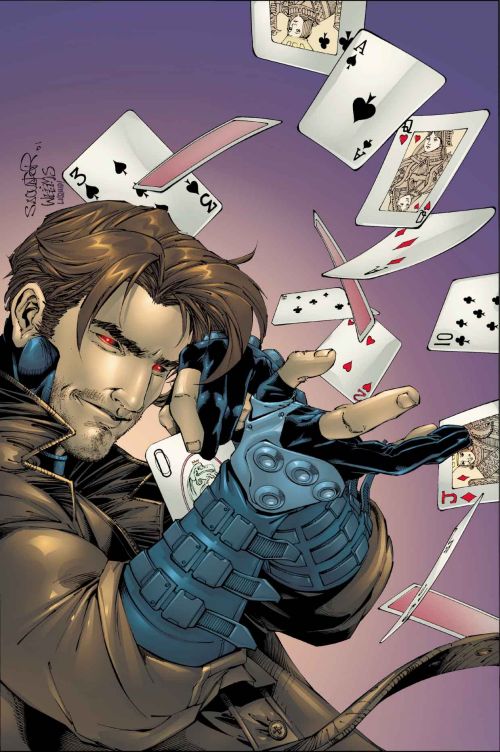 My son, Julian, enjoyed your blogs. He seems to share the same interest with your posts