Danielle Moonstar, originally codenamed Psyche and later Mirage, is a fictional Marvel Comics superheroine associated with the X-Men.
A mutant, Moonstar originally possessed the ability to create illusions of her opponents’ fears or wishes. She later developed a wide range of psionic and energy manipulation powers. She was a member of the X-Men's 1980s junior team the New Mutants and, after a long absence, its reincarnation X-Force.

Moonstar is a mutant who formerly had an empathic psi ability to create three-dimensional images of visual concepts from within the minds of herself and others. Her talent allowed her to manifest people's emotions as realistic illusions. It began as manifesting people's worst fears, many times in an uncontrollable fashion, against the will of both involved. Soon she gained the ability to control this and to manifest a person's "deepest desire." She can even create illusions by channeling residual thought and emotional impressions in an area (such as showing Wolverine a battle scene between Mister Sinister and unknown assailants, simply by entering the area where the battle had recently taken place). At first, Mirage could not control her image projecting powers and would draw and project images without consciously willing to do so. She has since gained control through training and maturity. 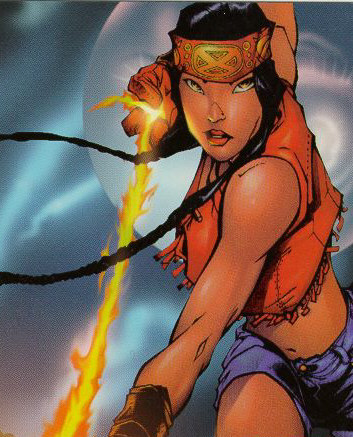 She also had for a time the ability to make the telepathic images manifest as psionic energy, becoming tangible entities of solid psionic force. This ability was limited in that Danielle could only sustain one illusion at a time. She often carried around a "dream spear," in order to destroy previous illusions. Many times, her powers caused her to experience sharp, blinding headaches.

When Moonstar rescued Brightwind, she became a valkyrie, and became endowed with the Valkyrie power to perceive and sense the coming of Death. As such, Moonstar could perceive a "deathglow" surrounding a person in serious danger of dying, a dark cloud or graphic visual image over people who were in mortal peril. This allowed her to save many lives. She could also perceive Death incarnate and even do physical battle with Death itself and her Valkyrie arrows were shown capable of causing pain to Hela. She has created an illusory "Cheyenne ghost-staff" drawing upon an image in her own mind and has successfully wielded it as a weapon against Death itself and the Asgardian death-goddess Hela.