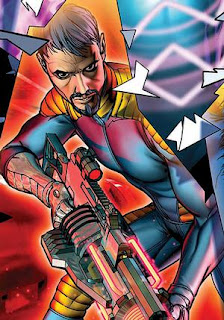 Forge is a fictional character in the Marvel Comics Universe, a superhero associated with The X-Men.
A mutant with an unsurpassed brilliance in technology, Forge has had a lengthy career as a government weapons contractor. He shared a romantic relationship with Storm, and a brief affair with Mystique which led him to associate with the X-Men, beefing-up the technology at the X-Mansion. He was also a member of the Pentagon-funded mutant group X-Factor.

Forge is a mutant with a superhuman intuitive talent for inventing mechanical devices, backed up by the ability to visually perceive mechanical energy in action. This power allows him to instinctively recognize the potential and functional uses of any machine or technological device in his visual range, a skill that combined with his natural intelligence gives him the ability to conceive, design and build highly-advanced mechanical devices; and operate, modify and disassemble existing technology or create countermeasures for it. Forge's superhuman talent for invention does not mean that he is of a superhuman intellect, even a genius at invention must for the most part consciously work out the theoretical principles behind the invention and then the design of the invention itself through a series of logical steps. In Forge's case, however, many of these logical steps are worked out by his subconscious mind. Hence, Forge himself might not be entirely aware of exactly how he figured out how to create an invention of his. Sometimes, he must disassemble a device he has made to even figure out how it works.

Forge wore synthetic stretch fabric backed by micro-thin bulletproof Kevlar and thermal insulation while a member of the X-Men. He sometimes employs devices of his own invention. Most notable among these was his Neutralizer gun that could suppress superhuman mutant abilities. The only known examples of this device have been destroyed. Forge has also invented a hand-held scanning device that can detect the presence of superhuman beings or aliens.

Forge has knowledge of many scientific and technological fields.

He also possesses various mystical abilities such as spell casting through mystical training, though he rarely uses these. He possesses extensive knowledge of Native American magic.

His bionic right hand and right leg often contain concealed weapons and devices that he can use in combat. In addition, they can be outfitted with computer interfaces and plasma blasters. His skill as a hand-to-hand combatant and as a marksman from his military training were so impressive that Nick Fury offered him a job with S.H.I.E.L.D.

Email ThisBlogThis!Share to TwitterShare to FacebookShare to Pinterest
Labels: Forge

Amazing comiks characters. Thanks for focusing on these articles. Quite entertaining.