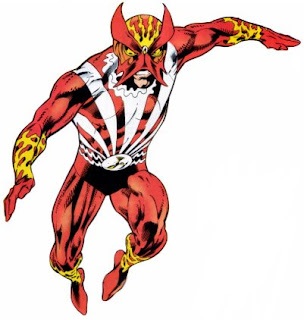 Sunfire (Shiro Yoshida) is a fictional character, a mutant superhero in the Marvel Comics Universe and former member of the X-Men
Sunfire is a temperamental and arrogant Japanese mutant who can generate superheated plasma and fly. Not suited for teamwork, Sunfire was only briefly a member of the X-Men and has kept limited ties to the team since. He has had some presence in the greater Marvel Universe.

Sunfire is a mutant with the ability to absorb solar radiation, and convert it to ionize matter into a fiery plasma state which bursts into flame when exposed to oxygen. He can release this energy though his hands as blasts of searing heat, deadly radiation, explosive concussive force, or simple flames. By ionizing the air around him, he can surround himself with an aura of heat intense enough to melt steel, or fly by focusing his aura downwards in a tight stream of ionized gas to propel him though the air like a rocket. Sunfire can see heat, by shifting his vision from visible light to infrared. Sunfire has the ability to form a psionic force field while using his plasma as protection from heat and radiation, both that of his own generation and that from outside sources.

Sunfire lost his powers to Rogue but after his transformation into Famine, a Horseman of Apocalypse, his powers were artificially returned through technological means, and he could now also use them to create flashes of light that affected the sections of the human brain which control hunger, causing any people who saw his light flashes to feel as if they were starving.

Shiro also seems to be quite an accomplished martial artist. He has displayed impressive hand to hand skills on several occasions and stated that he didn't need to employ his powers in order to defeat mere Hand ninjas. He is trained in karate and Japanese Samurai swordsmanship, and kendo. He is also an expert in the combat use of his superhuman powers. He has at least peak human strength and endurance.