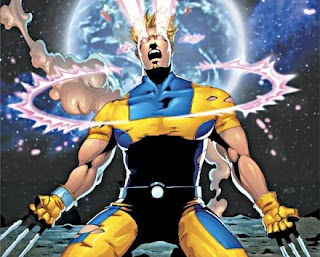 Mimic (Calvin Montgomery Rankin) is a Marvel Comics fictional character who was briefly a member of the X-Men in the 1960s. He was then the first character to be added to the team after the original line-up.

An alternate reality version of Mimic became a popular member of the Exiles, the reality-hopping team

The Mimic is able to copy the knowledge, skills, and powers (if any) of every individual within a certain range of him; different sources list this as anywhere from several feet to a mile radius. This applies to both superpowered and "normal" abilities, as shown when he duplicated Kitty Pryde's ninja training. He has shown the capacity to manifest numerous powers at the same time, and since he also absorbs knowledge, he can immediately use copied powers with the same skill level as the original owner. However, he occasionally shows difficulty in juggling multiple powers, and his body can be overloaded by absorbing too many at once. Usually the Mimic loses his duplicated abilities once out of range of the owner, but due to the length of time spent with them, his body permanently retains the powers of the original five X-Men: Angel, The Beast, Cyclops, Iceman and Marvel Girl . (The High Evolutionary's temporary elimination of the mutant gene once erased these powers from the Mimic's genetic template, but they appear to have returned since.) Thus, he has the powers of flight (granted by angelic wings) of Angel, the increased strength and agility of Beast (complete with enlarged hands and feet), the optic blasts of Cyclops (although lacking Cyclops' brain damage, Mimic is able to control them), the temperature manipulation of Iceman, and the telekinesis of Jean Grey.

Email ThisBlogThis!Share to TwitterShare to FacebookShare to Pinterest
Labels: Mimic