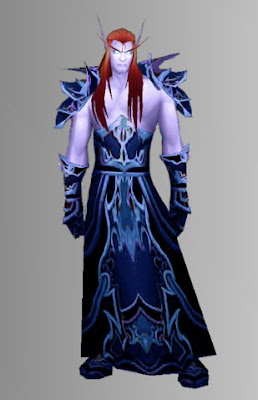 Dath'Remar Sunstrider was the leader of the Highborne who survived the War of the Ancients. He had originally been part of the Highborne who had stayed with Queen Azshara during the war. He was even offered to be turned into a satyr by Xavius but declined, becoming increasingly uneasy over the Highborne's affiliation with the Burning Legion. He and other like-minded Highborne worked secretly to slow the work of their brethren and the demons who were opening a portal for Sargeras to step through onto Azeroth. When Tyrande Whisperwind was captured by the satyrs, Dath'Remar took her into his confidence. This eventually lead to him freeing her and taking a large number of Highborne and escaping from the palace. During their initial escape, Dath'Remar and others were attacked by guards of the Highborne still loyal to the Burning Legion. He waved his hand and the guards flew into a wall. He said "That will teach them to dare attack a Highborne of the Elite Circle." The surviving Highborne escapees joined the Kaldorei Resistance at the end of the war much to the opposition of many night elves.
After the war, Dath'Remar was one of the leaders of the new night elf society and was present at the forbidden formation of the new Well of Eternity by Illidan, and later at the wonderous planting of the World Tree. The Highborne had to reconcile with the rest of the night elves if they were going to revive their civilization. This peace did not last forever. When the surviving night elves chose to take up druidism and forsake all forms of arcane magic, he called the druids cowards for refusing to use the power of magic. As the Highborne felt the pangs of their addiction to magic they grew more desperate, and in an attempt to convince the druids to change their minds, the Highborne led by Dath'Remar unleashed a terrible magical storm across Ashenvale Forest. For this final action, the Highborne were exiled. 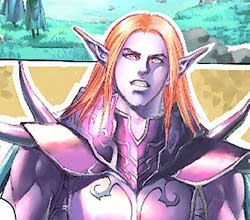 It is rumored that Dath'Remar's signature weapon was the sword Felo'melorn, also known as Flamestrike, which became an heirloom of the Sunstrider Dynasty and has been wielded by his descendants to the last of the Sunstriders, Prince Kael'thas. He also wielded the Sunstrider's Longbow.
Posted by bluedreamer27 at 1:04 AM