Vereesa Windrunner is an elven ranger who fought in the Second and Third Wars. She is the youngest sister of Sylvanas Windrunner who would later become the Dark Lady of the Forsaken, and Alleria Windrunner, a hero of the Second War.

Nearly all of Vereesa's extended family were killed by orcs in the Second War and in Prince Arthas's invasion of Quel'Thalas. Both of her sisters can be considered "alive" because Sylvanas still lives, albeit not technically "among the living", and Alleria Windrunner is likely still alive, but her whereabouts are not known.

Vereesa is a member of the prominent Windrunner family of the high elves. Her elder sisters Alleria and Sylvanas were Ranger Generals of Silvermoon City. She has at least two other brothers, one of whom was named Lirath. Her family lived at Windrunner Spire in the tranquil forests of Quel'Thalas. 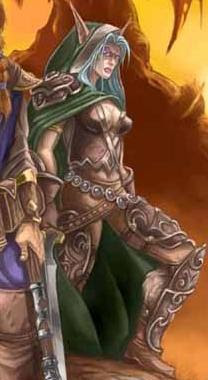 Vereesa is located in the Violet Citadel of Dalaran along with Rhonin, Archmage Aethas Sunreaver, and Archmage Modera. She is the leader of the Silver Covenant, a militant group of high elves who oppose the inclusion of blood elves in the Kirin Tor. She is involved in the Quel'delar quest chain: The champions of the Silver Covenant will fight the forces of the scourge in the Frozen Halls and its Sunreaver counterpart in Dalaran to restore the magical blade Quel'Delar from its defiled state by the Blood-Queen Lana'thel.

At first, Vereesa was unaware of Sylvanas' fate. However, when she learned of her fate, Vereesa mourned her sister and was enraged when her cousin Zendarin recklessly called Sylvanas a Banshee.

Richard Knaak has stated in an interview that he considers Vereesa as having animosity towards the blood elves, courtesy of her partnership with Rhonin and having pride in high elf traditions. This can be seen in Night of the Dragon and in World of Warcraft: Wrath of the Lich King.