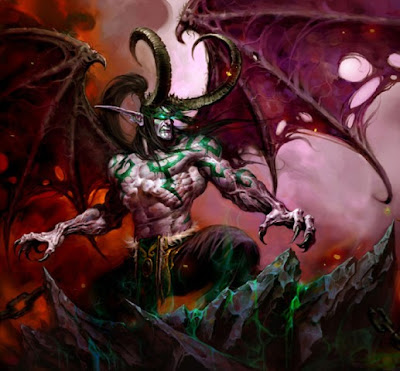 Illidan Stormrage was the self-proclaimed Lord of Outland, ruling from the Black Temple. He was born a night elf and, as stated by Maiev Shadowsong, became "neither night elf nor demon, but something more". He was the twin brother of Malfurion Stormrage and was in love with Tyrande Whisperwind. Once an unusually gifted sorcerer, the extent of his powers became difficult to classify due to his powers increasing in large bursts as a Demon Hunter and his having absorbed the powers of the dangerous arcane object known as the Skull of Gul'dan.

His pursuit of power and arcane mastery led him to commit a number of horrific acts against his own people and the races of Azeroth, including defecting to Sargeras during the War of the Ancients and creating the second Well of Eternity. For his actions, he was imprisoned for ten thousand years, until his release during the Third War. He came to be called the Betrayer for his acts against the night elf people and carried the title of Lord of Outland. Seeking to bring down her erstwhile prisoner, Maiev allied with Akama to invade the Black Temple, where she cornered Illidan in his inner sanctum and struck him down, bringing an end to one of the most tragic stories in Azeroth's history.

Illidan, also known as the Betrayer, was the twin brother of Malfurion Stormrage. He was a practitioner of Highborne magic. In his youth, he attempted to master the druidic forces as his brother had, but the sorcery called to him in a way that the magic of the land did not. Unlike his brother, Illidan was born with amber eyes; at the time, this was regarded by the elves as a sign of a great destiny— however, this actually indicated inherent druidic potential. 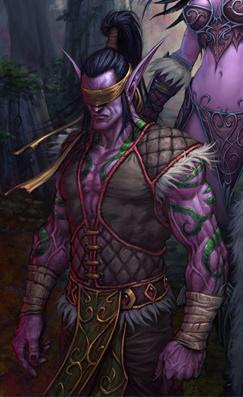 A great Demon Gate defended the Skull as Illidan and his forces had to fight mightily to gain access to the artifact. Driven by necessity and influenced by the belief that with the increased power, he could at last redeem himself in the eyes of Tyrande, he shattered the demonic seal and used the Skull's powers for his own. Strength he found, but peril greater than power came to him at once. The battle for control of the Skull came with a heavy price and the artifact's powers changed him. Transformed into a demon, Illidan wrapped himself in shadow and utterly destroyed Tichondrius and his demonic forces. But with victory came devastation. Tyrande and Malfurion sensed the demonic power lurking within Illidan and turned away with disgust and despair. Malfurion chastised his brother, convinced that Illidan had traded his soul for more power. Enraged, Malfurion banished his brother from the forests.
Posted by bluedreamer27 at 1:22 AM