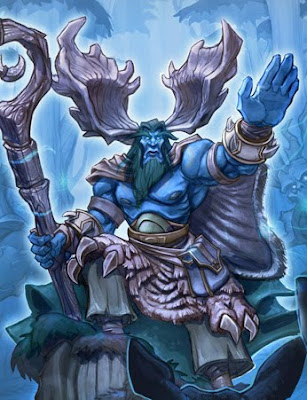 Malfurion Stormrage was the first night elf druid, and initiated the mainstream use of druidism among the night elven people ten millenia ago under tutelage of the demigod Cenarius. Through Malfurion's guidance, the kaldorei managed to successfully halt the Burning Legion's first invasion of Azeroth during the War of the Ancients. In its aftermath, he became the greatest of the world's archdruids. Malfurion Stormrage is the twin brother of Illidan Stormrage, as well as the loving and beloved husband of the high priestess of Elune, Tyrande Whisperwind. Together, the two have represented the highest leadership of the night elves ever since the fall of Queen Azshara and her Highborne caste.

Malfurion is often referred to as shan'do, which means "honored teacher" in Darnassian. Connected deeply to the ebb and flow of all life on Azeroth and bearing ten thousand years of responsibility and experience, he is one of the most powerful and venerated mortals of the Warcraft universe. Malfurion was the most dedicated of Cenarius' disciples. In the ancient world before the Great Sundering, Malfurion was a respected scholar loyal to his admired Queen Azshara. He was among the first to notice the distance Azshara and her followers were keeping from their people, and he began to suspect that the powers granted by the Well of Eternity were not as pure as all had believed. 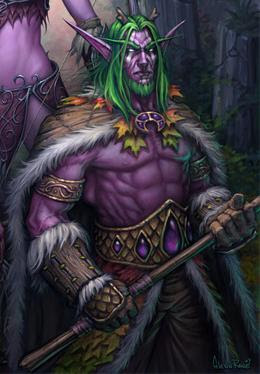 Malfurion Stormrage stands as both prophet and savior to his people. Some time after returning to Kalimdor alongside Tyrande, he learned that a number of night elves were planning to create a new World Tree in the hopes of regaining their lost immortality. Malfurion warned against it, arguing that nature would never bless such a selfish act. Shortly after that, Malfurion returned to the spirit realm known as the Emerald Dream, to replenish his powers after the events of the Second Invasion of the Burning Legion.

Malfurion is the wise and stalwart leader of the night elf druids. He has a fatherly air about him, and takes great pleasure in guiding people to discover insights about themselves and the environment around them. He prefers not to solve problems directly for individuals, or to give completely thorough answers, but rather provide useful hints and advice so that others may achieve discovery on their own.

He is grateful to the orc and human armies for their assistance against the Burning Legion and welcomes visitors of those races with open arms. He also holds great respect for tauren and dwarves. However, Malfurion considers high elves and goblins extremely distasteful, and will expel them from Ashenvale whenever he encounters them. Horde and Alliance politics hold little interest for Malfurion as, in his mind, the needs of his people and their environment transcend what he considers to be petty rivalries between the other races.