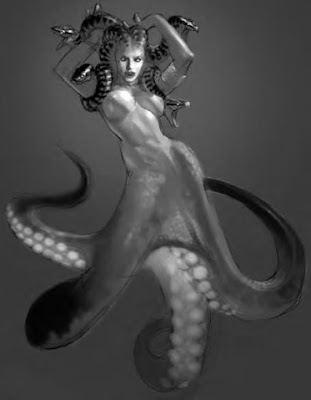 Queen Azshara was the beloved ruler of the elven people ten thousand years ago and is the current ruler of the monstrous naga. After her defeat at the hands of Malfurion Stormrage, and the Great Sundering that sent her and much of her Highborne into the sea, Azshara was transformed into the Empress of Nazjatar — progenitor of the serpentine naga.
One day, the queen was approached by her most trusted advisor, Counselor Xavius, who approached her with the idea of using the power of the Well of Eternity to cleanse the world and make it perfect in her eyes. Their meddling with immense magic, however, drew the eye of an interested observer: Sargeras. Seeking to unleash his Burning Legion upon Azeroth, the Dark Titan entranced Xavius, pulling the counselor under his power, followed quickly by most of the Highborne and eventually Azshara herself. Xavius helped the queen communicate with Sargeras, whom she told of her desire to cleanse the world of the lesser races. Sargeras tricked the queen into making a portal from which was launched the first invasion of Azeroth by the Burning Legion, an event which is now known as the War of the Ancients.

Queen Azshara, her handmaidens, and many Highborne sunk into the sea. The Old Gods chose Azshara as another useful tool and transformed her, her Highborne, and her Handmaidens into Naga. The mighty Queen Azshara still lives and rules the naga. Once she awoke at the bottom of the sea, she ordered a palace built to rival her home in Azshara. After the sundering of the world, however, and for the thousands of years since, Queen Azshara lives still, in the vast city of Nazjatar at the bottom of a deep ocean trench. She has embraced the power of the naga, grown in size, and possesses many tentacles bedecked in jewels and items of power. She plots her revenge on the treacherous Night Elves, biding her time until the growing might of the naga can be brought to bear. Living under the sea, she has become queen of the naga.
Azshara was extremely charismatic. Her physical and mental appeal were such that virtually no one noticed her more negative qualities. The vast majority of her servitors were willing to go to any means to elevate themselves in her eyes, even at the cost of their own lives. When Sargeras was contacted Azshara was elated, thinking she had finally found a mate worthy of her. Azshara is known to have used sorcery to increase her appeal, as proved when Illidan detected her spell shortly after receiving his new eyes. Xavius, who considered himself above her charms, was, in fact, completely enamored. Azshara was certainly powerful enough to do so. Mannoroth discovered, to his chagrin, that Azshara was far more powerful than he, and that only Archimonde and Sargeras could have matched her.
Posted by bluedreamer27 at 1:14 AM