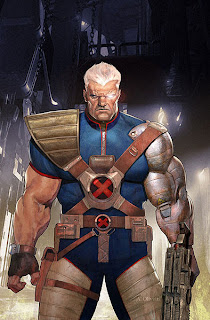 Cable is a fictional character that appears in comic books published by Marvel Comics
Cable was born with telepathic and telekinetic abilities, however, the extent to which he has been able to utilize these powers have varied dramatically throughout his appearances. Originally both were limited by his need to restrain his techno-organic infection and his powers were negligible compared to his more traditional fighting skills. However, following the subsidence of the infection they gradually increased to the point where they were similar in magnitude to those of Nate Grey, whom he is genetically identical to. At their height, he demonstrated the ability to simultaneously levitate the floating city of Providence and combat the Silver Surfer.. Following that story, his powers were burnt out and he replaced both with technological substitutes. Later he states that both his telepathy and telekinesis have faded to nothing.

During Messiah War, during the fight with his clone, Stryfe, Cable demonstrates the ability to hide others from Stryfe's mental view, implying that at least he retains some of his telepathic powers, whether he retains any telekinetic powers remains to be seen.

Email ThisBlogThis!Share to TwitterShare to FacebookShare to Pinterest
Labels: Cable