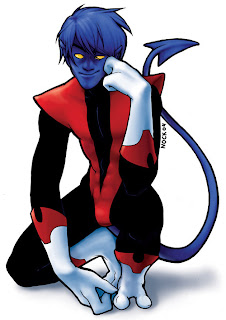 Nightcrawler (Kurt Wagner) is a fictional character, a comic book superhero in the Marvel Universe. He has been associated with both the X-Men and Excalibur,
A mutant, Nightcrawler possesses superhuman agility and the ability to teleport. His physical mutations include blue fur, three-toed and fingered feet and hands, yellow eyes, and a prehensile tail. In Nightcrawler's earlier comic book appearances he is depicted as being a happy-go-lucky practical joker and teaser, and a fan of swashbuckling fiction. A German, Nightcrawler is Catholic and while this is not emphasized as much in his earlier comic book appearances, in later depictions Nightcrawler is more vocal about his faith.

Kurt Wagner is a mutant whose primary mutant power is the ability to teleport himself, his clothing, and a certain amount of additional mass from one point to another virtually instantaneously. He does this by means of displacing himself through an alternate dimension briefly and reappearing in a desired location. He has been shown to be able to teleport distances of up to two miles (3 km) under optimal conditions, although it is at his extreme limit, and he can become severely fatigued if he tries to teleport that distance. (In one case, however, he teleports somewhere over 50 miles (80 km).
Nightcrawler has a prehensile tail, allowing him to grab onto objects with relative ease. His tail is strong enough to not only support his body weight, but also lift an adult man completely off the ground at the same time, and is deft enough to fight with while holding a sword or blunt object. Nightcrawler's eyes (which are constantly glowing) grant him a marked degree of heightened night vision, and it has been suggested that he has the ability to see in the infra-red spectrum as well