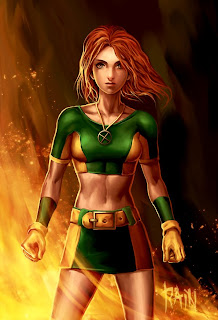 Rachel Summers (who now calls herself Rachel Grey and Marvel Girl) is a fictional character, a Marvel Comics superheroine created by writer Chris Claremont and artist/co-writer John Byrne. She first appeared in Uncanny X-Men #141 (January 1981) and has been affiliated with several teams including the X-Men and Excalibur.
She is the daughter of the X-Men Cyclops and Jean Grey from a harsh, dystopian alternate future. Her uncles, Havok and Vulcan are also very powerful mutants. She inherited her mother's telepathic and telekinetic abilities and was originally codenamed Phoenix after her. Also she is the mother of both Hyperstorm and Dream Summers in an alternate timeline.

She decided to rejoin the X-Men, taking the name "Marvel Girl " to honor her mother (who had recently died yet again) and wearing a costume her mother had designed but never worn; a variation on Jean's first green costume. She has also changed her last name to "Grey," becoming Rachel Grey, possibly to express disapproval at her father's betrayal of Jean, as well as continuing his relationship with Emma Frost, though she and Emma have made a truce of sorts during one of the team's missions in Hong Kong. She and Nightcrawler begin to have an attraction towards each other kissing at one point, but nothing came of it as Nightcrawler also had an attraction to Storm at the time, who is in somewhat of a romantic "friendship" with Wolverine

Rachel is a mutant who possesses the various psionic powers including telepathy, psychometry, and telekinesis as well as limited time manipulation abilities