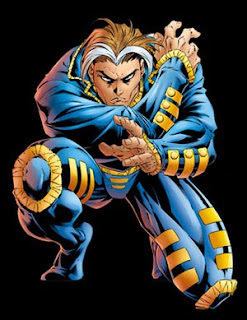 X-Man (Nathaniel "Nate" Grey) is a fictional character, a comic book superhero in the Marvel Comics Universe and related to the X-Men franchise. X-Man is an equivalent of the regular Marvel Universe hero Cable, hailing from the “Age of Apocalypse” reality. He is the biological son of his dimension’s Scott Summers and Jean Grey, born of genetic tampering by Mr. Sinister. His first name is derived from his creator; Mr Sinister's real name: Nathaniel Essex and his last name from his genetic mother Jean Grey. Due to being infected by a techno-organic virus, however, Cable never achieved the vast telepathic and telekinetic powers of X-Man while Nate Grey was one of the most powerful mutants in existence during his lifetime.

X-Man has the ability to tap into the enormous psychic resources of the astral plane in order to manipulate matter and energy. This grants him incredible psychic powers including telepathy and telekinesis. He can use his telepathy to read minds and even read residual thought imprints left on objects touched by people (psychometry), communicate with others by broadcasting his thoughts, control minds, create illusions by altering the perceptions of others, fire psionic blasts that can scramble an opponent's thought processes (causing the victim either intense pain, or rendering them unconscious), project his mind into the astral plane and even pull the astral projections of other telepaths into the physical world, and sense dimensional rifts or anomalies.
This defeat left Exodus humiliated - especially since he was centuries old while Nate was only 16 (he confirms himself to be physically 17 later on). In addition, an alternate version of Jean Grey, Queen Jean, described Nate Grey as the ultimate telekinetic with the statement; "It is what all Nate Greys have been on every earth"

Email ThisBlogThis!Share to TwitterShare to FacebookShare to Pinterest
Labels: X-man