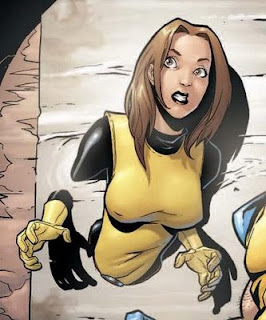 Katherine "Kitty" Pryde is a fictional character that appears in comic books published by Marvel Comics.
A mutant, Pryde possesses a "phasing" ability that essentially allows her and objects or people with which she is in contact to become intangible. This power also disrupts any electrical field she passes through, and lets her simulate levitation. At the time of her membership, under the codename Sprite, Pryde was the youngest person invited to join the team of mutant superheroes the X-Men. Pryde also used the name Ariel briefly.

During her early years, she is portrayed as a "kid sister" to many older members of the X-Men, filling the role of literary foil to the more established characters. In the years since her introduction, she has aged and matured, and has become a main character on her own.
As the team prepares to end the confrontation with the Breakworld leader, the team splits up—with Kitty on the team appointed to stop the missile pointed at the earth. Kitty phases into the missile to disrupt its circuitry noting that it is composed of the same material as the rest of Breakworld, making it difficult and exhausting for her to phase through. After phasing for a mile into the missile, Kitty finds the center only to discover it empty. The missile is fired, causing Kitty to pass out inside of it as Beast discovers too late that due to its shape, trajectory, and lack of internal circuitry, the Breakworld's weapon is not a missile, but a bullet. As the bullet hurtles toward Earth, Kitty lies unconscious within it. As the situation becomes increasingly dire, Emma establishes mental contact with Kitty, reassuring her that she will come out of this fine, though it eventually becomes clear to both that the situation will be grim. Kitty and Emma come to an understanding and reconciliation, Emma stating that she never wanted something like this to happen to her. Kitty then phases the bullet through the earth, but is trapped within. At the end of Giant-Size Astonishing X-Men, Scott Summers mentions that Dr. Strange, Reed Richards, and some "top men" tried to save her, but believe she has fused to the bullet, as it continues to hurtle through space. Whether she is alive or dead is unknown, though the X-Men consider her lost to them.