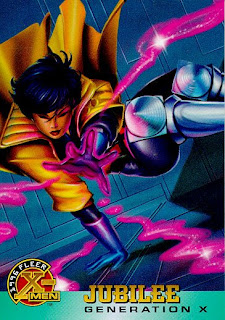 Jubilation "Jubilee" Lee is a fictional character, a Marvel Comics superheroine associated with the X-Men.
A mutant, Jubilee had the superhuman power to generate "fireworks" of explosive plasma. A teenage "mall rat," she was the X-Men's youngest member in the early 1990s, often playing sidekick to Wolverine. She eventually joined the junior team Generation X. She was a prominent character in the 1990s-era X-Men animated series. In late 2004, Marvel launched a self-titled series for Jubilee set in Los Angeles, written by Robert Kirkman and covers by Casey Jones; it was canceled after six issues.
Jubilee is one of the depowered mutant characters that has since reappeared using technology-based powers in the latest New Warriors comic series.

Jubilee had the mutant power to generate bright bursts of multi-colored energy plasmoids from her fingertips. She referred to these globules as "fireworks." The globules obeyed her mental control, traveling where she directed them, arranging themselves in balls, streamers, and other shapes, and exploding when she wished. The strength of the energy varies in degrees of power and intensity, and could range from a multitude of colorful sparkles capable of temporarily blinding a person to a powerful detonation capable of smashing objects and destroying property, or a precision burst inside a human brain, simulating the effects of a massive stroke. Jubilee could absorb the fireworks back into her own body without harm

Jubilee is a talented gymnast and rollerblade skater. While living rough, she used her skills to evade capture while stealing to survive, first from the various shops in the mall and later in the X-Men's Australian base. She has also displayed above average hand-to-hand combat skills, having learned street-fighting techniques while in Los Angeles County Juvenile Hall, and being coached further by Wolverine. Her skills are sufficient enough to survive combat with the Hand. She has also been shown to have strong leadership abilities, often being placed in a field commander role by Banshee during her closing time with Generation X, and acting as a drill-sergeant figure for the most recent New Warriors team. 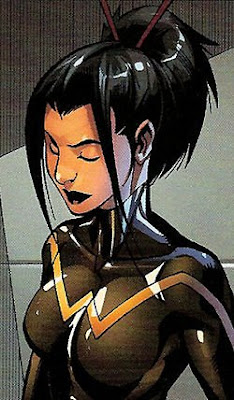 Email ThisBlogThis!Share to TwitterShare to FacebookShare to Pinterest
Labels: Jubilee