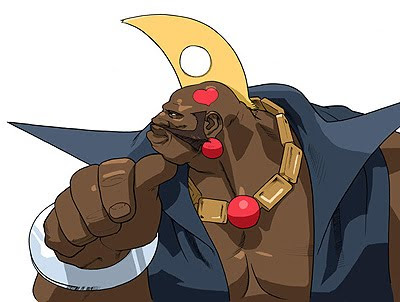 He is named after the golfing term "Birdie." The other English character from the first Street Fighter; Eagle is also named after a golf term. He was in the first game and made later prominent appearances in the Street Fighter Alpha games. He is depicted as a late 1970s British punk rocker. Birdie is a hulking figure with dyed blonde hair, a leather vest, several rings, and oddly pointed shoes. His unusual looking shoes are more common to punks in Japan, rather than the combat boots worn by punks in Birdie's native England. He also has a tattoo of a red heart on the side of his head and sports a patently impossible hole in the center of his mohawk, giving his unique hairstyle the appearance of a sharp bird's beak. 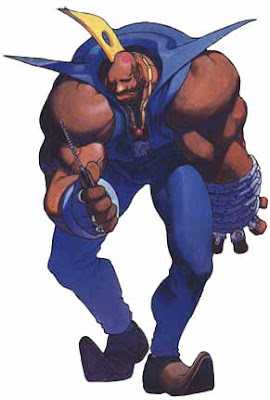 Birdie combines brawling with wrestling. His favorite techniques involve headbutting the opponent through the use of his attacks, Bull Head and Bull Horn. Bull Horn offers a moment of invulnerablility before attacking so it can be used to avoid projectiles and other attacks. It can be charged up much like Balrog's Turn Punch, but unlike Turn Punch it hits multiple times. His Bull Head is a full on charging headbutt but using it leaves him completely open so the player should use it carefully. His best attacks are his grappling techniques, Bandit Chain and Murderer Chain. The player should use his other attacks to get in close, then pull off his grappling techniques to cause damage.
Posted by bluedreamer27 at 11:18 AM